Salvador da Bahia is often called “the capital of happiness” due to its inhabitants’ friendliness, but it is a city of great social divides

Children from the SOS Children's Village on an outing (photo: SOS archive)

Salvador da Bahia is the capital of the state of Bahia and is one of the ten largest cities in the country. It has a population of roughly 2.6 million. The region’s economy relies heavily on tourism, its oil refinery and port, and agriculture such as the growing of cocoa. In 2001, the US company Monsanto opened a huge petrochemical plant where raw materials for the herbicide Roundup are now produced.

Despite the progress made in economic and human development terms in recent years in Brazil, the state of Bahia remains one of the poorest in the country.  In some areas, over 50 per cent of the population are poor. Bahia also has the highest number of people living in extreme poverty: an estimated 2.4 million people live on less – sometimes much less – than 30 dollars a month and are unable to meet basic needs such as food.

Young people are most severely affected and the number of adolescents living in poverty has been on the increase. Many of them are engaged in very precarious, informal work, are drug users, or they have experienced sexual abuse, discrimination or violence growing up. Such traumatic experiences during childhood can lead to severe problems concerning both physical and psychological health in later life. One study, for example, showed that in Bahia over 20 per cent of children between the ages of five and 14 suffer from emotional problems.

Like all large Brazilian cities Salvador da Bahia has large “favelas“, where people who cannot afford to rent in the “formal” areas of town live. They are very much stigmatised and viewed as second-class citizens, even though the service industry relies heavily on their cheap labour. Although not as prevalent as in Rio de Janeiro and São Paulo, organised drug dealing is common here, too. Once again, it is young people who are especially vulnerable of becoming entangled in it as they often lack social support or feel that they have no future prospects.

What we do in Salvador da Bahia 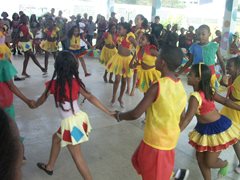 Dancing together in the SOS Children’s Village (photo: SOS archive)

SOS Children’s Villages began its work in Bahia in 1980.

Strengthening families: The SOS Family Strengthening Programme provides much needed support to families who are at risk of breaking down. We aim to reach out to those who are especially vulnerable. We ensure that they have access to services and that children go to school. We also run workshops on children’s rights and raise awareness on key issues affecting children and young people.

Care in families: For children from Bahia who are no longer able to live with their parents, SOS families can provide a loving home. In each family, the children live with their brothers and sisters, affectionately cared for by their SOS parents.

The families live in houses integrated into the neighbourhood, and all children attend the local schools and this way they are part of the community.

While children are in our care, and wherever possible, we make sure they are in regular contact with their family of origin. When a child can go back to live with their family, we continue to support them.

Support for young people: When young people from the village feel ready to move out of the family home in order to pursue further education or vocational training our youth programme makes shared accommodation available to them. With the support of qualified counsellors, the young people live together and learn to take responsibility, plan for their future and prepare for independent adult life.