SOS Children's Villages has been working in Greece since 1975. Due to the financial crisis which started in the late 2000s, we have increased our activities in the country. Our eight family strengthening programmes, two youth programmes and four villages providing family-based care, currently support over 2,000 children and adults people. In 2015 we started providing emergency aid to refugee families and children arriving in Greece. 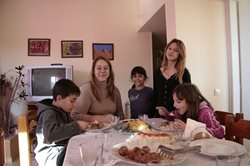 SOS Children’s Villages is working hard to ensure that children grow up in loving homes (photo: L. Yassin)
In the past decades, Greece had a high standard of living, and ranked consistently high in the quality of life surveys. However, the Greek economy faced a severe crisis at the end of 2009 and its full impact was felt by the Greek population.

At the start of the crash in 2010, the governmental debt was one of the highest among the European Union (EU) member nations. The Greek government received bailout packages from the EU and the International Monetary Fund on condition that it introduced a series of austerity measures which included cuts in public spending and tax increases.

The situation, however, did not improve – by 2015 the economy had shrunk to a quarter of its previous size and the government debt had risen to over €300bn. In January 2015, the anti-austerity coalition, headed by the Syriza party, came to power.

Greek families are deeply affected by unemployment and poverty

The recent economic and political changes have had a devastating effect on the majority of Greek families. Due to the rise in taxes and unemployment and the fall in welfare payments, the strain of poverty has led to an increase in divorce, depression and suicide.

The Greek official unemployment figure stands at nearly 17 per cent, though in some areas of the country it is much higher. Many have not had a steady income in years; initially they could receive social security benefits but their situation has become more and more desperate as benefits have stopped and their savings have been depleted.

Nearly one third of Greeks has no access to medical care. The health services were hard hit by the cuts in governmental spending. The public healthcare system has practically collapsed, with non-governmental organisations trying to fill the gap, often with voluntary staff and donated medicines.  Families have been unable to afford basic treatment or preventative measures such as vaccinations for the children.

There has recently been an increase in the cases of malnutrition. As the price of food has gone up, many families haven’t been able to feed their children the nutritious food they need. The number of people visiting food banks and soup kitchens has risen.

Two in every five Greek children live in poverty 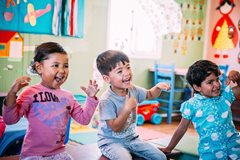 Our child friendly spaces support refugee chidlren who have recently arrived in Greece (photo: A. Horst)

There are around 1.9 million children under the age of 18 living in Greece. The lives of children have worsened: child poverty rates have more than doubled since 2008, and nowadays over 40 per cent of children live in poverty.

The present conditions and general uncertainty about the future has led to increased tensions in families. Although at first, extended family networks were able to help each other, after years of struggling many have exhausted their resources. They are no longer able to meet the material and emotional needs of their children. Neglect of children, abuse and violence are often the result of long-term difficulties, and there is a need for increased support to avoid such outcomes.

An increasing number of families have been seeking the help of SOS Children’s Villages. In 2012, these were low income families, but in the last three years those with middle-incomes have also sought support.