Oil is the main source of income 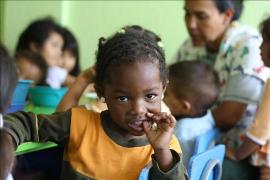 At the SOS Community centres, children can play, learn and get nutritious meals. (photo: S. Preisch)
The Republic of Ecuador is located in South America and shares borders with Peru and Colombia. Ecuador has a total population of roughly 15.9 million with around 1.7 million living in Quito, the country's capital. Guayaquil is the largest city with 2.7 million. The country is characterized by a rich cultural and historical background.

In the past, the country suffered from social and economic instability, but the last decade has brought more stability. At present, the economy is dependent on oil, agriculture and money that is sent to Ecuador from workers abroad.

In April 2016, a 7.8 magnitude earthquake hit the central coastal area of the country. Over 600 people died and around 16,000 people were injured.

Over recent years, poverty reduction programmes have noticeably taken effect: while in 2006, 38 per cent of the population lived in poverty, this figure had dropped to 23 per cent in 2014. There is, however, a high level of inequality between the rich and the poor.

Poverty rates are higher in rural areas, where around 39 per cent of the population are poor. Many people who can't make a living in rural areas, they move to cities or abroad in search of a better life.

The health situation has also improved in recent years: for example, the infant and mother mortality rates have dropped. But more needs to be done: some diseases and deaths in rural areas would be preventable if health services were more readily available. The lack of safe drinking water and of proper sanitation also has an impact on the health of families. In rural areas around 24 per cent of people don't have access to improved drinking water and 19 per cent don´t have proper sanitation facilities. Around 22 per cent of children suffer from malnutrition - the number is significantly higher in rural areas and among indigenous communities. 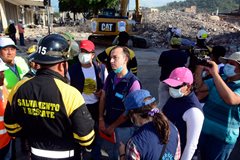 A member of the rescue team talks to an SOS Children's Villages co-worker in the Portoviejo area after the earthquake (Photo: A. Zambrano)
Around 5.6 million children live in Ecuador. Although the government has introduced measures to protect the rights of children, only one in five children grows up in households free from neglect or abuse. Around eight per cent of children are forced to work, mostly on farms in rural areas and in family-owned business in cities.

The government has recently invested in education and introduced measures to encourage parents to send their children to school. Most children finish primary school, but about 20 per cent of girls do not go to secondary school.

Teenage pregnancies are high: one in five girls between the ages of 15 and 19 become mothers. The majority drop out of school, and then struggle to raise their child.

Young people find it hard to become independent. One in five young people under the age of 24 don't have a job. Those who do work are often paid low wages or can only find part-time employment.

Strengthen Families: We work with local organisations and the community to support vulnerable families so that children can grow up within their own family. We ensure that families have access to food, medical care and also provide day-care for young children.

Care in SOS families: If, in spite of all assistance, children cannot be taken care of by their own family, they can find a loving home in one of the six SOS Children's Villages in the country. Some of the SOS families live in houses which are integrated in the community.

Support for young people: We provide young people with support, further education and training until they are able to live independently.

Emergency programme after the earthquake in April 2016 :
Website of SOS Children's Villages Ecuador
(available in Spanish)