SOS Children's Villages has been working in Serbia since the 1970s (when the country was still part of the former Yugoslavia). Our work began near the northern town of Novi Sad, and in 2003 the organisation began working in central Serbia, near Kraljevo.

Disparities between urban and rural areas 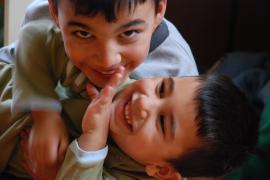 Serbia has a population of around 7.3 million (2019 est.) but faces some demographic challenges. It has experienced a negative population growth since the 1990s. Between 2002 and 2011, the population fell by about two million. Furthermore, the population is getting older, and the number of children born is low.

About half of the population lives in urban areas, with the capital city of Belgrade being home to 1.5 million people. Due to the economic situation, many people move to urban areas in search of work. Rural areas have fewer employment opportunities and the infrastructure is not fully developed.

An economy in need of stabilisation

A period of political turmoil and conflict during the 1990s left the country's infrastructure and economy destroyed; the situation was worsened by economic sanctions and international isolation. After the war, the economy had to be rebuilt. The established trade partners and routes were lost and the country had to find new trading arrangements. The service sector now employs over half of the population, with the other half being distributed equally between agriculture and industry. However, high unemployment is a persistent problem - the figure was 22.4 per cent for 2012.

The country faces other challenges: just under nine per cent of the population lives below the nationally-established poverty line, though a much higher number are believed to be at risk of falling into poverty. The Roma, most of whom arrived in Serbia from Kosovo in 1999, face particular disadvantage - they suffer from inequality. For example, 60 per cent of the Roma live in crowded slum housing - there is no clean water source or sanitation facilities. 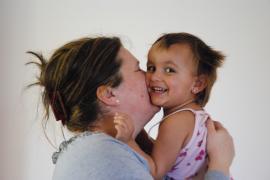 A girl cuddling with her mother - photo: K. Ilievska

About a fifth of the population is under the age of 24. The wider social, economic and political changes have affected the lives of children – over 100,000 live in poverty. There are various reasons why children might be at risk of losing parental care: unemployment, poverty, health problems and the low level of education of the parents. Children with disabilities or those with HIV are also at risk. An estimated five thousand children are without parental care in Serbia. Most of them have at least one parent alive. Children in rural areas are particularly at risk because families there have less support than those in urban areas.

According to the World Health Organisation, Serbia has improved the overall health care of children by reducing the infant and under-five mortality rate. In spite of this, children of Roma origin are three times more likely to die before the age of five than non-Roma children.

Unemployment is a widespread issue in Serbia, but young people are at a particular disadvantage: 47 per cent of young people who are actively looking for a job are unable to find one.

Young people do not have many opportunities for further vocational education or training. For young people from disadvantaged backgrounds, with few qualifications and little experience, these opportunities are even more limited

Care in families: Children who cannot live with their families find a loving home in the SOS families. They grow up with their brothers and sisters, and are cared for by SOS parents.

Wherever possible, we try to reunite the children with their families of origin. Whenever this happens, we work towards supporting them during the period of change and adjustment.

Education: We aim to ensure that all children in our care attend kindergarten and school.

Support for young people: Young people find it hard to become independent in Serbia. We offer both practical and psychological support to young people while they finish their studies and improve their skills. We collaborate with local businesses so that young people have access to internships, scholarships and vocational training.

Advocacy: SOS Children's Villages works with the government and other agencies to promote social reform that improves the rights of children. Most recently we have been working together to ensure that children do not grow up in big, impersonal institutions, but are rather cared for in family-like settings.