The number of people living in poverty in Russia increased in 2016 to an estimated 40 million people. Children from deprived families, especially where there are more than three siblings, are at a risk of losing parental care. SOS Children’s Village provides support for vulnerable families and their children.

Poverty has risen in recent years 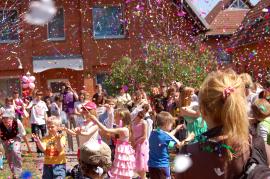 A chance to celebrate together: children at a birthday party (photo: M. Mägi)
Russia is the largest country in the world, covering an area of about 17.1 million km². Russia's population is estimated to be around 144 million (July 2016 est.). Only about a quarter of the population lives in urban areas, Moscow being the largest city with over 12 million people.

After the fall of the Soviet Union, many political, social and economic changes occurred. As in other former Soviet republics, Russia's economy was hit hard by the disintegration of the USSR. After 1991, the quality of life fell and in 2000 around 40 million people lived in poverty.  The economic situation improved in the following decade but recently poverty has increased to the same levels again.

Vulnerable families are struggling to look after their children because the cost of food, fuel and other basic goods has increased recently.

Russia is divided in terms of standard of living. Much of the economic development has taken place in the Moscow region. Rural regions are particularly disadvantaged: the infrastructure needs modernising and not all districts have access to improved drinking water and sanitation facilities. The government has been working to improve the access to, and quality of, health care outside urban areas.

As a result of the recent social changes, the health of the population has declined since 1991. The average life expectancy for Russian men and women is up to 14 years shorter than in the European Union. Russia has a considerable problem with tuberculosis and HIV/AIDS. Governmental intervention has slowed the rate of growth of both these diseases, but the country still has one of the fastest-growing HIV/AIDS epidemics in the region. An estimated 1.5 million people are living with HIV/AIDS. 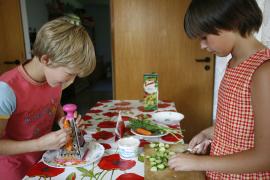 Helping in the kitchen - photo: I. Hidalgo
The political and economic changes have also affected family life, and around 70% of poor families have children. Families with more than three children are most likely to live in poverty. These children are particularly vulnerable to losing parental care. Exploitation in the hands of human traffickers is a real threat, especially in big cities where children may fall victims of commercial sexual exploitation.

Since 2011 there have been changes to the way in which children without parental care are looked after. The children are not placed in institutions, but live in family-like settings such as foster families. At SOS Children’s Villages, we have adapted our work to ensure we can provide care for more children in foster families.

SOS Children’s Villages has been supporting vulnerable families and children in Russia since the late 1980s.

Strengthen families: SOS Children's Villages works with local organisations and communities to support vulnerable families so that they can stay together. We ensure that they have access to basic goods and services such as health care and education. We also provide training and advice so that parents can generate an income to look after their children.

Care in families: If, in spite of all support, children are unable to stay with their parents, they find a new home in SOS families, some of which are integrated into the community. Some children grow up in SOS foster families – these are co-funded by the Russian state and SOS Children's Villages, and live as part of the SOS Children’s Village itself. In addition to financial support, SOS Children’s Villages provides training and support to ensure that the children grow up in families full of respect and security.

Wherever possible, we work closely with the children’s family of origin, so that the children can return to live with them.

Advocacy: We work closely with state departments, local communities and organisations to improve the rights of children, in particular those who have lost, or are at risk of losing, parental care.

Support for young people: We support young people until they are able to live independently. We give them access to further education and vocational training so that they have the right skills to find a job or start their own business.