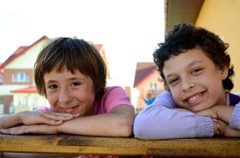 Friends at SOS Children's Village Hemeiusi, where children in our care grow up in family homes with their siblings (photo: K.Ilievska)
Romania borders Ukraine in the north, Moldova in the east, the Black Sea in the south-east, Bulgaria in the south, Serbia in the south-west, and Hungary in the west.

People in search of a better life

In the decade following the overthrow of Ceausescu, the country's economy declined. Recovery started in 2000, and in 2006 the country recorded one of the highest growth rates in gross domestic product in Europe. Once again the economy suffered during the 2009 recession, but made a slow recovery in later years. The current per capita gross domestic product is just over 40 per cent of the EU average.

Although 30 per cent of the population still lives under the nationally-established poverty line, this figure is beginning to improve. The poverty rate is higher in rural areas than in urban ones, and there are big regional differences.

At present the unemployment rate is 7.5 per cent (2013 est.). Agriculture employs 30 per cent of the population, industry 23 per cent and services 47 per cent.

In spite of the improving standard of living, many people are moving abroad. The promise of a better life in another country lures many people into the hands of human trafficking organisations. Since 2008, Romania has become the largest supplier of sex workers to other EU countries.

The health system is facing challenges: not only is it experiencing budget cuts but also corruption and shortage of drugs and staff  - the latter form a significant percentage of those emigrating abroad in search of better working conditions. Parents who move abroad often leave their children behind, in most cases in the care of relatives. In 2008 over 96,000 cases were reported.

One per cent of the population has HIV/AIDS. Most of these cases are children who were brought up in the Romanian orphanages in the 1980s. Orphanage staff would inject blood as a food substitute. The syringes were not changed and with some contaminated blood, the disease spread quickly. At present the epidemic is believed to be spreading quickly through drug use and sexual transmissions - the most vulnerable groups are sex workers, street children and homeless adults and those addicted to heroin.

Children are in need of protection 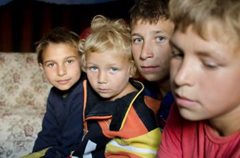 Children from our family strengthening programme. SOS Children's Villages is supporting the family so that they can stay together (photo: K. Ilievska)

The children of Romania have been affected by the recent economic, social and political changes. As parents have struggled to find employment, there has been an increase in poverty. Children living in these families sometimes face precarious situations such as labour exploitation, violence, and domestic violence. Many are ultimately taken into care.

The general cuts in public spending have affected children due to less investment in education and in health provision. The country continues to score low in the international Program for International Student Assessment (PISA). The under-five mortality rate stands at nearly three times the EU average. The funding of services, and their quality, varies according to location. Staff turnover is also a problem in these sectors, partly because of low wages.

Despite planned measures to provide support to families, the percentage of children taken into care has remained the same over the past ten years. Small children – under the age of three – constitute the group who are most taken into care. Children with disabilities are routinely placed in institutions or with foster care; the reintegration into their family is difficult.

The aim of these programmes is to enable children who are at risk of losing the care of their family to grow up within a caring family environment by supporting families and building their capacity to care for their children. In co-operation with local authorities, assistance systems for vulnerable children and their parents are strengthened within the community. Children whose parents cannot take care of them will find a loving home in one of the SOS families.