Divided communities in a divided city 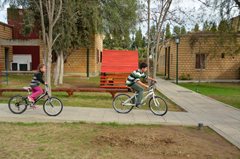 SOS Children's Village Lefkosa is based on the outskirts of Lefkosa, also known as Nicosia, the capital of Northern Cyprus, which is home to around 220,000 people. The area has shops and different social facilities. Our organisation has close links to the surrounding community, not only providing support to families in need, but also attending many local celebrations and cultural festivities.

The division of the island, and the fact that Northern Cyprus is not fully recognised by the international community, has brought many hardships to its population. Lefkosa remains a divided city and this too has had a negative effect on the living conditions of its residents. The economy remains dependent on transfers from Turkey, and the implementation of a European Union aid programme aimed at the Turkish Cypriot community has been difficult due to the poor cooperation between the Greek Cypriot and Turkish Cypriot communities.

SOS Children's Villages has been very active in the development and implementation of the child protection policy of Northern Cyprus. The necessity to support families in need was clear, it was also essential to provide children who had lost parental care with loving homes.

The SOS Children's Villages idea that children who had lost parental care could be looked after in loving SOS families, rather than in state-run orphanages, became an attractive option and our organisation was encouraged to become active in the city and fulfil this view of alternative care.

What we do in Lefkosa 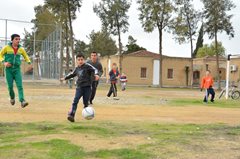 SOS Children's Villages supports the local community through the family strengthening programme. It is run in conjunction with the local social welfare service and in collaboration with other agencies in the area. It provides children with access to essential educational, nutritional and health support. Families are encouraged to build their capacity to protect and care for their children by taking part in workshops on income generation and parenting skills.

The community is also supported so that vulnerable children and their families can continue to live together. As families become self-reliant, they may choose to leave the programme, thus allowing new families to seek assistance. When children can no longer be cared for by their parents, they can find a loving home in one of the eleven SOS families, where they live with their brothers and sisters and are cared for by an SOS mother.

The SOS Kindergarten provides day care for up to 75 children. In Lefkosa, there is a high prevalence of "working poor", that is people who, in spite of having a job, live below the nationally-established poverty line. The provision of good-quality and affordable childcare is particularly valued by these parents who can go to work knowing that their children are being cared for by professionals.