One of the poorest regions of the country 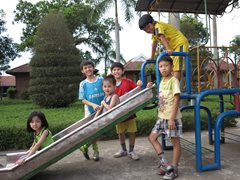 The city of Vinh is situated at the mouth of the Songka river, about 300 km south of Hanoi, in Nghe An province. The province is one of the largest in the north central area of Vietnam. It is home to a big number of ethnic minorities who are marginalised due to their ethnicity and also because many live in remote areas.

It is estimated that around 17 per cent of the population lives in poverty, a situation which has attracted investment from international aid organisations in order to improve conditions. Vinh has potential for economic growth due to its strategic position and good transport infrastructure. However, the productivity remains low and currently the investment in future development is limited. Although the transport links are good, other infrastructure, such as the sewerage and water treatment facilities are in need of upgrading.

Providing support to families in need and loving care to children

The social and economic conditions in the area make the work of our organisation particularly important. Life for poor families and children is full of hardships. The poverty assistance payments do not reach families who would be entitled to them. Education remains out of reach for many, because although they are not charged fees, they cannot afford the other costs (books, transport and uniforms) involved. Furthermore, it is often difficult for them to access health care. The provision of training and support for families, young people and children has continued to improve the lives of many in the local area.

What we do in Vinh 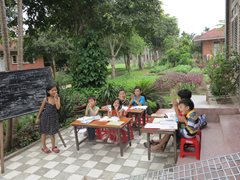 Children in our care go to kindergarten and school. Here they are playing school with their brothers and sisters. (photo: SOS archives)

An important part of SOS Children's Villages' work in Vinh is related to supporting children and families in the vicinity of where our organisation is based. The SOS Family Strengthening Programme provides support for vulnerable families. We give financial support to families in need or to children who have lost parental care. This aid is used to cover children's basic needs, such as food, clothing and school expenses. We also offer counselling on health issues and psychological support.

When children can no longer live with their families, they can find a loving home with one of the SOS mothers - there are 15 SOS families who can care for up to 150 children.

Young children from the neighbourhood can attend the SOS Kindergarten. Qualified staff at the kindergarten can look after up to 190 children. The provision of day-care is particularly valued by those parents who go to work - they know their children are being cared for by professionals.

Older children can go to the SOS Hermann Gmeiner School, which caters for over 1300 children of both primary and secondary level. There is also a canteen where children can eat, thus ensuring they have one square meal a day.

The youth programme can accommodate up to 34 young people. They are given professional support while they attend further education or start a vocational training course. The young people are encouraged to develop perspectives for their future, learn to shoulder responsibilities and increasingly make their own decisions.