The mid-autumn festival at the children’s village (photo: SOS archives)


Đà Nẵng is located on the south-central coast of Vietnam and is the largest city in region. The town has grown rapidly and is home to over one million people (2015 est). This urbanisation is mainly due to immigration, as thousands come to the city each month in search of work. Da Nang is an important industrial and commercial centre, and is also home to one of the country’s most important seaports.

Historically, the north and the south of the country have been more developed than the central region, but recent years have seen increased government efforts to bring about economic growth in the region. Fast progress has been made in reducing poverty and improving access to education and health care. However, despite these efforts, informal settlements continued to grow. In these shanty towns, people live in substandard housing, in conditions that are often overcrowded and unhealthy. Basic services and infrastructure are also lacking for a large part of the population. Urban poverty is therefore on the rise.


Mothers often struggle to give their children everything they need

Unemployment also continues to be a problem. This makes thousands of families incredibly vulnerable: if the main breadwinner of the family loses their job, falls ill, or if natural disaster strikes, the family can rapidly fall into poverty. Training opportunities for unskilled labourers are also not sufficiently available. In addition, environmental issues, such as the pollution of streams due to poor sanitation, can lead to chronic health problems, which affect the wellbeing of the entire family and the healthy development of children in particular.

Single mothers often struggle greatly to meet their children’s needs and provide all the basic things they require. When a child has a disability the situation becomes especially difficult. An estimated 1.2 million children in Vietnam have a disability – many of them due to exposure to Agent Orange chemicals. Only around one-third of them receive treatment, and half of them remain illiterate. Often, parents cannot afford to travel to see specialists, they may not be aware of their right to receive social assistance, and many schools are inaccessible to children with disabilities.


What we do in Da Nang 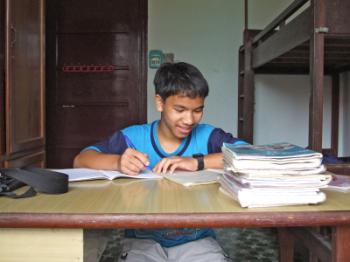 A boy doing his studying (photo: SOS archives)
SOS Children's Villages started its work in Da Nang in 1993. Today, the SOS Social Centre here offers a family strengthening programme to members of the surrounding communities, which aims to identify struggling families and provide all the support they need so that their children will be safe and healthy and can attend school. We cooperate with local authorities and organisations in order to reach out to as many vulnerable, at-risk, abandoned or orphaned children from the neighbourhood surrounding the SOS Children’s Village as possible. For parents who are struggling to look after their children, we provide monthly grants so that they can meet basic needs. We also offer health counselling and psychological support.

For children who are no longer able to live with their parents, 16 SOS families can provide a loving home. In each family, they live with their brothers and sisters, affectionately cared for by their SOS mother.

Together with children from the neighbourhood, they go to the SOS Kindergarten, where up to 190 children are taught. The SOS Hermann Gmeiner School with its 25 classrooms, laboratories, a library and a canteen offers classes up to secondary level. It has a capacity of 1,000 students. Both the kindergarten and the school are open to children from the neighbourhood.
Young people from the SOS Children's Village usually move on to the SOS Youth Programme when they start a vocational training course or go on to higher education. With the support of qualified counsellors, they develop perspectives for their future, learn to shoulder responsibility and increasingly make their own decisions. At Da Nang, we also offer young people workshops for basic technical training.