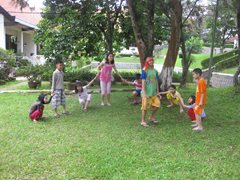 Brothers and sisters in our care playing in the garden (photo: SOS archives)

The city of Da Lat is the capital of the Lam Dong province in southern Vietnam. The north of the province is very mountainous and around 70 per cent of it is covered in forests. The region scores lower than the national average in terms of life expectancy, literacy and per capita gross domestic product. Those living in rural or mountainous areas face particular hardships. Many people decide to leave the rural areas and find a better future in the cities. However, life in urban areas such as Da Lat is also fraught with difficulties.

Children are the first victims of the harsh social and economic circumstances. The children who come into our care are no longer able to live with their parents. The main reasons include: that one or both parents have died due to AIDS, that the parents have been affected by traffic or work-related accidents, or that they have migrated to other regions or abroad. Some of these children are left in the care of extended family members, but in many cases the relatives are also unable to look after them. Children from rural areas often migrate to the cities on their own. When they arrive here they become exposed to the risk of exploitation and abuse. Human trafficking is a problem in the region and internal trafficking is often linked to the rural-urban migration. Da Lat is reported to be one of the major destinations of internal trafficking where the majority are forced to work in prostitution.

Women and girls are particularly vulnerable. Poor parents often take girls out of school at an early age because they are needed to work in the home or on the land. The combination of poverty and little education means that girls are more likely than boys to end up in circumstances where they are abused and exploited.

Providing support to families in need and loving care to children

The social and economic conditions in the area make the work of our organisation particularly important. The provision of support and training for families, young people and children has continued to improve the life of people who lack even the most basic means to earn a living or to ensure that their children can receive an education.

What we do in Da Lat 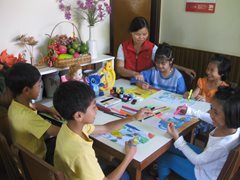 Some children from an SOS family colouring in together (photo: SOS archives)

An important part of SOS Children's Villages' work in Da Lat focuses on supporting children and families in the area. Through the SOS Family Strengthening Programme we support vulnerable families. We give financial support to poor children to cover their basic needs, such as food, clothing and school expenses. We also provide health and psychological counselling. In Da Lat, the programme gives special attention to the children who no longer live with their parents. Their legal guardians receive monthly financial support to enable them to take care of the children.

If children can no longer live with their families, they can find a loving home in one of the 14 SOS families, who can care for up to 140 children. Young children from the SOS Children's Village and the neighbourhood can attend the SOS Kindergarten, which can look after up to 100 children. The provision of day-care is particularly valued by those parents who go to work - they know their children are being cared for by professionals.

Older children can go to the SOS Hermann Gmeiner School, which caters for pupils at both primary and secondary level. There is also a canteen where children can eat, thus ensuring that they receive at least one nutritious meal a day.

The SOS Youth Programme was started in 1994. Young people are given professional support while they attend further education or start a vocational training course. The young adults are encouraged to develop perspectives for their future, learn to shoulder responsibilities and increasingly make their own decisions.