SOS Children's Villages started working in Thailand in 1971, after Queen Sirikit of Thailand had seen the work of the organisation while on a state visit to Austria. At first the organisation was present in Bangpoo, near the capital city of Bangkok, but has since started providing support in a further four locations in the country. 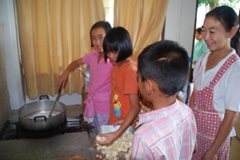 The city of Chiang Rai is the capital of Chiang Rai province in northern Thailand. The province, which borders Myanmar (Burma) and Laos, is one of the poorest parts of Thailand. Traditionally the population has dedicated itself mainly to the cultivation of opium using slash-and-burn techniques. Although now illegal, this form of cultivation continues and causes deforestation, thus increasing ecological threats such as floods and landslides. However, due to the remoteness of the area and the lack of mineral resources, the population has hardly any alternative ways of earning a living. Large parts of the population of the northern provinces are immigrants from neighbouring countries. Most of them are not even officially registered as Thai citizens and therefore have no civil rights, cannot assume regular jobs or obtain land titles.

Driven by poverty and malnutrition, scores of unaccompanied Burmese children cross the border into Thailand every day. Most of them have never received a formal education, since there are only very few schools in the border area of Myanmar (Burma); in addition, the schools usually charge fees that poor families cannot afford. Therefore these children are forced to earn their living in Thailand by taking any job they can get. Many of them do not speak the Thai language, so they end up doing menial work in tea parlours, restaurants or hotels or, in the worst cases, engaging in overt or clandestine prostitution. Due to their traumatic childhood experiences, once they become older they run great risks of becoming addicted to the locally produced amphetamines, and many of them find themselves working for drug barons in the area. Others move to the large cities in the south, where quite a few of them engage in illegal activities. There are numerous reports of child-trafficking to other provinces.

A fundraising campaign within the country brings hope

The Thai government has launched a number of projects to help abandoned and orphaned children in the north of the country, but there is still a great need for long-term family-based care. Therefore, SOS Children's Villages Thailand started a fund-raising campaign in the country and managed to raise the money needed to ensure that some of these children could be cared for in SOS families.

What we do in Chiang Rai 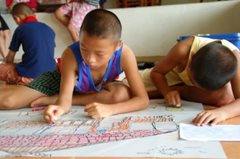 Children in our care during a workshop (photo: SOS archives).
SOS Children's Village Chiang Rai took in the first children in January 2006. It is located on the main road from Bangkok to the North at a distance of about 12 km from Chiang Rai International Airport. A hospital, a market, schools, a college and a university are all within a radius of about 12 km.

SOS Children's Villages tries to strengthen local families by providing a kindergarten where professionals look after children while parents are at work. For poor families, especially for single parents, it is very important to have a place where their children are looked after during the day. Hot meals are served at the kindergarten every day, which helps families keep their children well-nourished.

Children whose families can no longer take care of them can find a loving home in one of the 14 SOS families. In order to make sure that they are well-integrated into society, they attend the SOS Kindergarten together with local children. Later they go to local schools, where they can make friends and become part of the wider community.

SOS Children's Villages offers special programmes for young adults. They can live together while they attend vocational training or higher education. With the support of qualified counsellors, the young people develop perspectives for their future, learn to shoulder responsibility and increasingly make their own decisions.