Since 2011, Syria has been engulfed in conflict. Millions of people have been affected and around 6.5 million children need assistance. SOS Children's Villages has been working in Syria since 1981. We support vulnerable families, and also care for children and young people who can no longer live with their families.

Families are struggling to survive

SOS Children's Village Damascus is keeping children who have lost their parents safe (photo:  A. Pamuk). .

Syria’s capital city of Damascus, which had a population of roughly 1.8 million before the war started, is located in the south of the country. Although Damascus has been one of the safer Syrian cities, there have been repeated reports of shootings, bombings, deaths and injuries.

The tense security situation has affected the lives of all Syrians since the conflict started. Families in some areas of the city find it increasingly hard to find food – prices have risen sharply - and clean drinking water.

The Syrian health care system has practically collapsed.  More than half of Syria's hospitals have been destroyed or badly damaged: medical help and medicines are in very short supply. Around 30 per cent of schools are no longer in operation and, in spite of temporary schools and classes, around one third of school-aged Syrian children are not receiving an education.

Syrian children are in urgent need of support. Due to the ongoing conflict, SOS Children's Villages is carefully monitoring the situation in order to ensure the safety of children and families in our care.

In 2017, due to the high number of children who had lost parental care, more SOS families were formed. They live in Saboura, in southwest Damascus which is considered to be one of the safest areas of the country.

What we do in Damascus 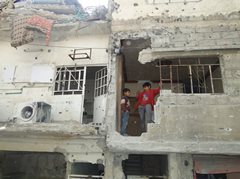 We support familes who are struggling to survive amid the fighting (photo: A. Pamuk)

Care in SOS families: SOS families care for children in Damascus. We care for over 300 children who have either lost parental care or are waiting to re-join their biological families. Brothers and sisters grow up together in the care of an SOS parent. The SOS families, from both Aleppo and Damascus, have stayed together during the war and have moved to safer areas wherever necessary.

Support for young people: SOS Children’s Villages supports young people while they continue their studies, do further training or look for a job.

Strengthen families: SOS Children's Villages aims to strengthen local families by offering access to essential education, nutritional and health services. We offer support to families who are at risk, and enable children to grow up within a caring family environment.