Since 2011, Syria has been engulfed in conflict. SOS Children's Villages - with over 40 years’ experience in the country - is supporting children and young people who have lost parental care and providing emergency relief to vulnerable families.

Families in Aleppo face a daily struggle to stay safe 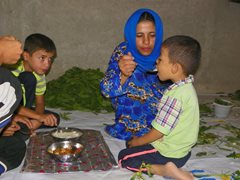 A mother feeding her children in the vicinity of Aleppo where SOS Children’s Villages  provides hot daily meals (photo: A. Pamuk).

Before the start of the war, Aleppo was Syria’s most populous city, with around 5.9 million inhabitants. At present four million live in the area.

Since the beginning of the conflict, there have been almost daily reports of shootings, bombings, deaths and injuries. The situation has deteriorated sharply and Aleppo has been destroyed by years of fighting.

Families in Aleppo face a daily struggle to stay safe and meet their needs. The price of basic goods has risen sharply. Families find it increasingly difficult to find food, fuel and safe drinking water.

Numerous health care facilities have been destroyed. There is a shortage of medical centres, equipment, medical staff and medicines.

Efforts to support the entire community

The second SOS Children’s Village in Syria was opened in 1998 in Khan El Assal, near Aleppo.

In autumn 2016, all the families from SOS Children’s Village Qodsaya were evacuated due to the increased fighting. All the children and staff were unharmed and evacuated to a secure temporary village in a safe location. A few weeks later, when it was once again safe, they were able to move back into the SOS Children's Village Qodsaya.

What we do in Aleppo 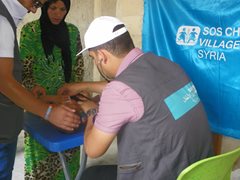 Despite the ongoing hostilities, SOS co-workers were making every effort to support endangered children and vulnerable families in Aleppo.

Provision of food and water: Working in coordination with other agencies we provide access to water and daily meals to approximately 18,000 displaced people. In addition, we distributed food kits.

Medical help and advice:  Until October 2016, we provided medical care and check-ups, and we handed out more than 1,100 hygiene kits, which contained, among other things, soap, toothpaste and laundry powder.

Assistance to mothers and infants: We gave medical support to expectant mothers. In addition, we distrubuted baby-kits, which included crucial supplies such as blankets, clothing and infant milk.

Counselling: Many adults and children are traumatised. We offer psychological support to girls and boys so that they can work through their experiences.

Care and protection for children without parental care: The SOS Children's Villages Interim Care Centres care for unaccompanied and separated refugee children and for those who have lost parental care due to the war. We work hard to find their families so that children can return to live with them. However, if this isn't possible, the children stay in our care. In April 2016, the security situation forced us to evacuate the Interim Care Centre in Aleppo; the children moved to Damascus.