Since 2011, Syria has been engulfed in conflict. Millions of people have been affected and around 6.5 million children need assistance. SOS Children's Villages has been working in Syria since 1981. We support vulnerable families, and also care for children and young people who can no longer live with their families. 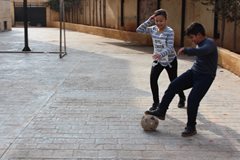 Before the start of the civil war, Syria had a population of around 22.5 million, and this was growing steadily. Most of the population lived in cities such as Damascus, Aleppo and Homs.

The number of people living in poverty remained high in spite of efforts to improve the standard of living. The situation was especially acute in rural areas. At the time, Syria was home to around 1.4 million refugees from Iraq and about half a million Palestinians.

Since 2011, Syria has experienced unprecedented changes, which has put it at the centre of international attention. Millions of families and their children have been affected by the fighting.

An estimated 500,000 people have been killed and 11.7 million Syrians have had to leave their homes. An estimated 13.5 million Syrians require urgent humanitarian aid. More than 6.1 million are internally displaced and more than 5.6 million have risked their lives to seek safety abroad. Most of the refugees have fled to the neighbouring countries of Turkey, Lebanon and Jordan, but others have sought refuge further afield.

Life has become increasingly hard for families who have stayed in Syria despite the war. Those who have lost their homes are now staying with relatives or sheltering wherever they can. In many cases, they are living in unsafe, unstable and overcrowded arrangements. Under these circumstances families try their very best to care for their children and stay together. But sometimes this is just not possible.

The majority of adults and children has experienced violence and loss, and are traumatised by years of warfare. These families need medical and psychological support. However, the Syrian health system has practically collapsed: more than half of the country’s health care centres are badly damaged or destroyed. 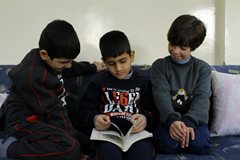 The war has taken a disproportionate toll on children.They are trying to survive under life-threatening conditions. Family homes have been destroyed; a growing number are displaced and have to find a way of finding food and clean water.

Millions of children are traumatised: they have witnessed violence and lost relatives and friends. Trauma affects children’s mental health and impedes their personal and emotional development.

In 2021, 2.4 million children were out of school. Schools have either been destroyed by the fighting, or are being used for other purposes such as emergency accommodation. Other activities that children took for granted, such as playing outside are not always possible.

Throughout the decades, SOS Children’s Villages has adapted its support according to the different needs in the country. During the conflict, we have provided emergency humanitarian assistance to families and children, and some of these have now become permanent programmes.

Family strengthening: SOS Children's Village Syria is supporting children and their families so that they can stay together. We offer different support depending on the individual needs of the family. In some cases, this may be providing food or helping them with access to health services. SOS Children's Villages also helps families so that children can go to school.

Care for children who cannot live with their families: Children who have lost parental care live in SOS families in Damascus. Families currently live in three neighbourhoods in Damascus. Here they will live integrated in the community, alongside other families in the neighbourhood. In 2012, some children were evacuated from SOS Children's Village Aleppo and found a stable home in Damascus. Other children and young people were separated from their families due to the war. We work hard to reunite families, but if this is not possible, the children stay in our care.

Although Damascus is relatively safe, we are carefully monitoring the situation and making every effort to ensure the safety of the children and young people in our care.

Support for young people: Young people have lived through some of the worst conditions at one of the most critical time of their lives. They need extra help and support while they finish their education and find a way to make a living and live independently.