After many years of civil war, the tropical island of Sri Lanka is now trying to get back on track. Tens of thousands of Sri Lankans were internally displaced as a result of the war. SOS Children's Villages has been helping children and young people all over the country to create their own future in a peaceful and positive environment. 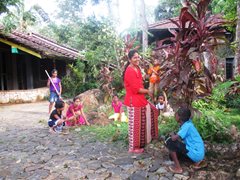 Children playing in the safety of the garden at the children’s village (photo: SOS archives)

Galle is a coastal town in Sri Lanka’s Southern Province and the fourth largest town in the country. The area’s beautiful beaches attract many visitors each year, and tourism is a major pillar of the local economy. However, despite bringing a certain amount of wealth to the region and raising people’s standard of living, tourism also has a darker side. Galle has become notorious for child sex tourism, especially with regard to the sexual exploitation of young boys by foreign tourists. It is estimated that there up to 40,000 child sex workers in Sri Lanka.

Among the reasons why children become vulnerable to being sexually exploited is a lack of parental protection, for example if the mother has moved abroad to work and left the children in the care of the father or her extended family. Equally, when parents go to work on one of the country’s many cinnamon or tea estates, the children are often left home alone. Alcoholism in parents is another factor that can put children at risk, and children living in precarious conditions in slums are susceptible to substance abuse. Children who lack protection from their parents are also likely to drop out of school. If they seek work in hotels and shops, they are in danger of falling into the hands of the wrong people. When a child has experienced sexual abuse or rape, they are often ostracised from the community or even shunned by their own family.


From emergency relief to the sustainable improvement of living conditions

In December 2004, Galle was hit by a devastating tsunami that destroyed much of the city’s infrastructure and killed thousands. At the time, SOS Children’s Villages set up activity centres for 500 children, and the older children from the SOS Youth Programme Galle helped with the distribution of food and the clean-up of community offices. We also provided families with initial grants to build temporary shelters and buy basics such as kitchenware and food.

Today, the SOS Social Centre in Galle provides a family strengthening programme to the local community, which aims to support vulnerable families so that children can grow up in a safe and stable home. We ensure that children have access to basic nutrition, health services and education, for example by providing nutritious meals, textbooks, and extra tuition for the children.  We have also established a new library and computer room in two of the locations where our outreach programme works.

To help parents improve their situation, we give guidance on income-generating skills, we offer crafts classes for women and assist them in obtaining micro-loans so that they can become financially independent. We also provide medical care, including antenatal and immunization care in cooperation with local health authorities. We identify malnourished children and provide them with a high-protein diet. We run nutritional programmes for mothers and children and provide counselling and psychological support to over 240 families.


What we do in Galle

An SOS mother helps out with homework (photo: SOS archives)
SOS Children’s Village began its work in Galle in 1990. Today, twelve SOS families can provide a loving home for up to 120 children from the region. In each family, the children live with their brothers and sisters, affectionately cared for by their SOS mother.

The children go to the SOS Kindergarten together with children from the neighbourhood, ensuring that they make friends and are integrated into their local community. They then go on to attend local schools together.

Once the children reach adolescence they usually move on to the SOS Youth Programme. While they attend higher education or vocational training, they live in shared houses, and are supervised and guided by a qualified SOS counsellor as they learn to live independently, take responsibility and increasingly make their own decisions.