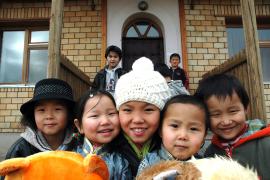 Children striking a pose for the camera (photo: L. Wolf Nielsen)
Mongolia is a landlocked country in the east of Central Asia.  Around 2.9 million people live in Mongolia (July 2015 est.); the capital city of Ulaanbaatar has 1.3 million inhabitants (2013 est.). Most people are of Mongol ethnicity, and the official language is Khalkha Mongol. The main religion in the country is Buddhist Lamaism.

Mongolia has an extreme climate characterised by long winters with subarctic temperatures and very hot summers with temperatures as high as 40 degrees Celsius. The unpredictability of the weather often results in the destruction of crops and the death of cattle; this causes serious problems for the rural families who rely on agriculture and livestock for their livelihood.

Mongolian society has undergone rapid social, economic and political changes in recent decades. Poverty and unemployment were widespread during the first decades after the fall of the Soviet Union. However, the economy began to recover, growing by an average of nine per cent between 2004 and 2008. Gross domestic product rose by 7.8 per cent in 2014. The unemployment rate stands at around eight per cent (2014 est.). At present, approximately 50 per cent of the population works in the services; industry accounts for around 21 per cent and agriculture for about 29 per cent. Some analysts believe that the country could be transformed into one of the world's fastest growing economies if its rich natural resources were exploited.

In spite of recent improvement in living conditions, the level of poverty has remained persistently high over the past two decades; around 30 per cent of people live under the nationally-defined poverty line. People in rural areas face many disadvantages: the poverty rate has increased in recent years. In addition, the economic uncertainties and the lack of opportunities have forced families to migrate to cities in search of work. Approximately 72 per cent of the population lives in urban areas, but the number is increasing rapidly.

In spite of recent developments, children are still in need of protection

There are around 862,000 children under the age of 18 living in Mongolia. Over the past decades, the government has increasingly promoted and protected the rights of children by ratifying international treaties and implementing national legislation. The lives of children have improved in many ways, for example, infant and child mortality has decreased. However, they have also been affected by the on-going challenges posed by the political, economic and social changes. The high poverty rate and the social and geographic inequalities have hindered progress towards improving the lives of children. 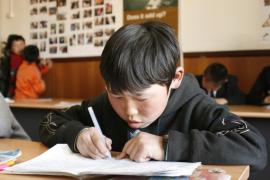 Young boy during class (photo: C. Martinelli)
In the past decades, the divorce rate has increased and the number of crimes committed against children has risen. The number of children committing crimes has also grown: about ten per cent of the imprisoned population is under the age of 18 - the most common causes for receiving a sentence are theft and robbery.

Child labour is a persistent problem; around 18 per cent of children between the ages of five and 14 are involved in work. Children in rural areas are more likely to be forced to work for free; it is calculated that about 90 per cent of rural children work for their families. They are less likely to attend school, thus limiting their chances of finding a job in the future.

The precarious conditions of women and children, especially in the poorer rural areas, make them particularly vulnerable to human trafficking. Mongolian women and children are trafficked for sexual and labour exploitation, not only to surrounding countries, but also further afield. The problem is believed to be rising, and the government has initiated an action plan to combat human trafficking.

Our work in Mongolia began in 2002. At present, SOS Children's Villages is supporting vulnerable children, young people and families by providing:

Strengthen families: The SOS Social Centres run family-strengthening programmes, which support families in need by providing them with information about parenting skills, nutrition, health and finances.

Care in families: When, in spite of all support provided, children can no longer be cared for by their parents or relatives, they can move into an SOS family where they are looked after by an SOS mother. The children grow up with their brothers and sisters in SOS families.