SOS Children's Villages has been working in Lebanon since the mid-1960s, supporting children, young people and families. In the past decades, we have continued to provide assistance during the series of violent conflicts which have affected the country. Since 2013, the SOS Emergency Programme has been supporting refugees who have arrived in Lebanon from Syria.

Urban poverty and a tough life in the refugee camps 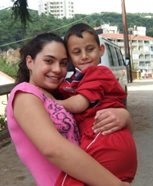 Lebanon is still recovering from years of conflict. The 2006 war with Israel severely damaged Lebanon’s infrastructure and economy. Thousands of people lost their homes and their livelihoods. Nearly 400 children were killed; many more were deeply traumatised by the events.

Over the past few years, Lebanon has suffered the effects of the conflict in neighbouring Syria. The political climate is tense and this had had an effect on the economy. There has been a fall in investment, and unemployment has increased. When parents find it hard to get a job, they struggle to care for themselves and their children.

Lebanon is also home to a large number of refugees, predominantly from Syria, Palestine and Iraq. Over 1.3 million refugees live in overcrowded camps, informal settlements and cities. Most have access to health care and education, but these services are becoming strained as the number of people arriving increase.

For children growing up in Lebanon today, life is filled with insecurity and the threat of violence. An increasing number of families live in poverty. In order to pay for food and other basic needs, parents take out debts or send their children out to work.

During the civil war that lasted over 15 years, we opened an SOS Social Centre to assist the great number of children who had lost parental care. Nowadays our work continues: we ensure that children have access to medical care and we pay for their school fees if necessary. We also support families until they become financially independent. For example, we offer workshops so that women can learn a trade and make money.

What we do in Bhersaf

SOS Children’s Village Bhersaf is located near the small town of Bikfaya, around 30 km from Lebanon’s capital, Beirut. We provide the following support:

Strengthen local families: We work hard to ensure that families can stay together. In 2014 we supported 842 children from the neighbourhood. 36 families became independent: they set up catering services, sold handicrafts or offered hairdressing and beauty services.

Family-based care: Children who can no longer live with their parents are cared for in one of the twelve SOS families - up to 108 children find a loving home here. Brothers and sisters grow up together, and are looked after by their SOS mother.

Education: Children attend local kindergartens and schools, and are part of the community from a young age.

Support for young adults: Young people, who are ready to move out of their SOS families, move into special accommodation. Girls and boys live in different houses and continue with their schooling or training. SOS Children's Villages gives them psychological and educational support and will help them look for work so that they can live independently.

Emergency Programme: Since 2013 we have been assisting refugee families in need. We provide them with food and economic assistance.