Astana's growth is attracting many people to the city 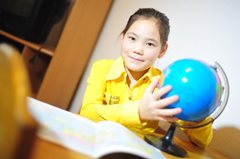 We make sure that the children in our care get a good education which will help them become  independent adults (photo: SOS archives).
Astana has been the capital of Kazakhstan since 1998; the name "Astana" means "the Capital" in Kazakh. The city is located in central Kazakhstan in a very flat, semi-desert steppe region. Since Astana became the capital of the country, the number of inhabitants has increased rapidly, and it is now home to around 708,000 people (2010 estimate). This growth is expected to continue in the foreseeable future.

The area has traditionally processed agricultural goods. When Astana was declared the capital city, and therefore the new home of the government, a huge investment was made into construction in order to house these official institutions and the expected increase in population. This construction boom attracted many workers to the city; they arrived from other areas of Kazakhstan and also from neighbouring countries. More worryingly, there have been reports that organised criminal trafficking rings brought many people to the city, where they ended up working in precarious conditions with no rights.

In spite of the spectacular transformation of the city, in the neighbourhoods beyond the modern centre, many families continue to live in unrennovated Soviet-style apartment blocks which are difficult to keep warm during the long, cold winters. The low salaries, pensions and benefits means that many people struggle to make ends meet, especially since the cost of living and housing has been rising in recent years. Children are amongst the most vulnerable members of society. Single-parent households and families with many children often cannot afford the cost of education or health care.

Providing support to families and loving homes to children

Amid all the social and economic changes taking place, the work that SOS Children's Villages does supporting vulnerablechildren who have lost parental care is vital. The Municipality of Astana has been very supportive of our activities in the area and donated the plot of land where our organisation is based.

What we do in Astana

Brothers and sisters spending time outdoors (photo: SOS archives)
If children can no longer be cared for by their parents, they can find a loving home with one of the SOS mothers. There are fourteen SOS families who can care for up to 91 children. The children grow up with their sisters and brothers and attend the nearby schools. The village's proximity to the local schools, hospitals, shops and markets means children are fully integrated into the local community.

The SOS Kindergarten provides care for up to 80 children from the SOS families and from the neighbourhood. The provision of day-care allows parents to go to work knowing that their children are being cared for by qualified staff.

When children are ready to leave their families they move to the SOS Youth Programme. The young people live in special houses during their vocational training or further education and can prepare for an independent life under the guidance of professionals.