The joy of seeing a smiling child drives our work in the area (photo: SOS archives).
Almaty lies in the south-east of Kazakhstan at the foot of the Tien Shan mountain range, close to the borders with China and Kyrgyzstan. Almaty used to be the country's capital until 1997 and, with around 1.4 million inhabitants, remains the largest city in Kazakhstan and the country's major commercial centre. Most people in the city work in financial services or in the information and communications technology sector, which is a contrast to the surrounding rural area where half of the population lives off agriculture.

In general terms, the standard of living in Almaty has improved in recent years. Although the salaries paid out in the city are amongst the highest in the country, the benefits of the new economic development are not equally distributed throughout the population. The unemployment rate for the city is estimated to be 6.3 per cent, which is above the average rate for the country.

Many people have moved from rural areas to Almaty in search of work. However, many, including those with some form of employment, continue to live precariously on the margins of society. The number of children living in poverty in urban areas continues to be an issue. Children from migrant families and those with disabilities are at a greater risk of living in poverty. They are less likely to go to school and more likely to be involved in child labour.

Working with the authorities to provide support

In recent years, the state has taken some measures to prevent children from losing parental care and to help those who have lost parental care: it has increased the assistance to socially vulnerable children and given them material aid so that they can attend school. It is also working to reduce the number of children in orphanages and move them into foster families. SOS Children's Villages works very closely with the local government agencies, ensuring that children have access to the support they need. In addition, the assistance to families and children who have lost parental care, the provision of day care so parents can go to work, and the tailored support to young people embarking on an independent life have formed the core of our organisation's work in the area.

What we do in Almaty 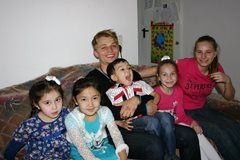 Children whose families can no longer take care of them can find a loving home in one of the eleven SOS families who can look after children. The children from the SOS families attend nearby schools together with local children, which helps them become part of the community.

The SOS Kindergarten provides care for up to 80 children from the SOS families and from the neighbourhood. The provision of day-care allows parents to go to work knowing that their children are being cared for by qualified staff.

When children are ready to leave their families they move to the SOS Youth Programme. The young people can live in special houses during their vocational training or further education and prepare for an independent life under the guidance of professionals.