These young girls have found a new home and family in SOS Children's Villages (photo: M. Mägi).
The Republic of Kazakhstan is located in Central Asia. It has borders with Russia in the north, the Caspian Sea in the west, Turkmenistan, Uzbekistan and Kyrgyzstan in the south and China in the south east. It is the ninth largest country in the world and covers a total of 2,724,900 km².

Kazakhstan has a population of 17.7 million (July 2013 est.) and the capital city of Astana is home to around 709,000 people. The country is ethnically and culturally diverse, with over 130 different ethnic groups. Around 63 per cent of the population are Kazakhs, with Russian, Ukrainian, and Uzbek minorities, among others. Islam is the main religion, with Russian Orthodox Christianity being the second largest.

A growing economy thanks to revenue from natural resources

As the Soviet Union collapsed, Kazakh president Nursultan Nazarbayev declared the country's independence in December 1991. The national economy plunged into chaos, but Nazarbayev gradually introduced economic and political reforms to support the country's development. It was able to regain some economic stability after the rise of petrol prices in 1999: gross domestic product (GDP) averaged around nine per cent between 2000 and 2007. Even though the economy suffered as a result of the 2008-2010 global financial crisis, it has significantly recovered since, with a seven per cent growth in GDP in 2010.

Although only a small minority of Kazakhs have benefited from the economic boom, unemployment and inequality are lower in Kazakhstan than in the surrounding countries. The unemployment rate is 5.3 per cent (2012 est.). An estimated eight per cent of the population lives under the nationally-defined poverty line. Poverty is found mostly in rural areas.

The government has attempted to reform and improve the health care system; however, its quality has deteriorated since independence. It is estimated that 13,000 people suffer from HIV/AIDS (2009 est.); most cases are among intravenous drug users. In 2005-2006, there was a public health care crisis in the South Kazakhstan region when, as a result of medical negligence, 118 children and 14 mothers were infected with HIV.

Many children are still deprived of parental care 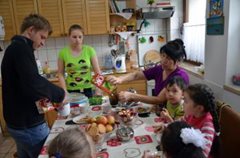 An SOS family sits down for an afternoon snack together. Talking around the kitchen table gives everyone the feeling of belonging (photo: M. Mägi).
There are around 4.5 million children under the age of 18 in Kazakhstan. The social, economic and political changes have affected their lives in different ways. There has been a rise in the number of children without parental care, partly because of the lack of resources to support vulnerable families who are suffering from alcohol or drug abuse, from illness or from poverty.

In the recent past, most children without parental care ended up living in institutions. However, the government is now seeking to place more children in alternative forms of family-based child care.

The economic changes have forced many people to move out of rural areas and into urban ones. As families leave their home villages, their support structures - members of their wider family or long-standing friends - can no longer be called upon in times of need. There has been an increase in the number of children who live on the streets; often these children do not attend school and are vulnerable to malnutrition, violence and sexual abuse.

Around two per cent of children between the ages of five and 14 are engaged in child labour. Many work for 13 hours a day, harvesting tobacco for export - the high levels of nicotine and pesticides damage their health.

Since our arrival in Kazakhstan in 1994, SOS Children's Villages has responded to the pressing needs of local children and young people.

When children can no longer stay with their families, they are cared for in one of the SOS families. They grow up with their brothers and sisters and are looked after by their SOS mothers. As children grow older they join the SOS Youth Programme, where professional staff continues to support them.