SOS Children's Villages started working in Jordan in the 1980s. At first, our organisation was present in Amman and over the following decades, it also began supporting children, young people and families in the harbour town of Aqaba and in the northern city of Irbid.

Urban poverty and a tough life in the refugee camps 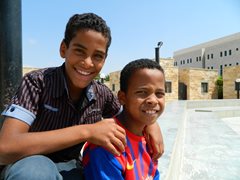 Irbid is located in northernmost Jordan near the border with Syria and is the country’s second largest city with a population of over 660,000 in its metropolitan area. The city’s economy is based mainly on the service sector. Although rates of rural poverty continue to be higher than those for urban poverty in Jordan, the highest concentration of poor people do live in the country’s urban centres. This includes Irbid, where pockets of abject poverty exist across the city.

Irbid is home to hundreds of thousands of refugees. Before the outbreak of the Syrian civil war, around 25,000 Palestinian refugees live at the camp in Irbid. Overcrowded schools, high unemployment, high population density and insufficient availability of health care are some of the issues that impact their lives.

In recent years, Jordan has taken in many more political refugees from Syria. Most of these refugees crossed the border illegally. Many of them live in poverty, unable to find jobs and adequate housing. For children, this situation is particularly difficult, as they are not only torn from their homes and the environment they are familiar with, but many of them have experienced violence and traumatic events.

The majority of women are well educated but do not work

Despite Jordan’s generally stable economy and developing industry, unemployment rates remain high, particularly for young people. According to a UNICEF report, some of the main reasons why it can be so difficult for young people to find employment are a lack of career guidance, a lack of jobs that match university qualifications and skills, as well as cultural obstacles that hinder women’s full integration into the labour market. Less than twelve per cent of Jordanian women currently participate in the economic sector.

Although universal primary education for both boys and girls has virtually been achieved in the country, and secondary school enrolment rates are even slightly higher for girls than for boys, women are still at a certain disadvantage when it comes to matters of marriage, divorce and inheritance, which are regulated by Sharia courts in Jordan.

What we do in Irbid 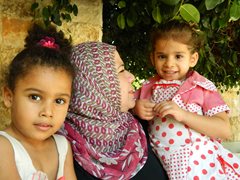 An SOS mother with two girls in her care (photo: SOS archives).
SOS Children’s Villages began its work in Irbid in 1999. We provide the following support:

Family-based care:  Children from the region who are no longer able to live with their parents can find a loving home in one of twelve SOS families. In each family, the children live with their brothers and sisters, affectionately cared for by their SOS mother.

Education: The children attend local kindergartens and schools, ensuring that children from SOS families make friends and are integrated into the local community from a young age.

Support for young adults: When young people who grew up in one of the SOS families feel ready to move out in order to study, receive training or work, the SOS Youth Programme continues to support them as they make the transition into independent adulthood. The young adults live together in our houses for boys and for girls, supervised and guided by a qualified SOS counsellor. Of course the young people also maintain close contact with their SOS mother and siblings.