SOS Children's Villages started working in Jordan in the 1980s. At first, our organisation was present in Amman and over the following decades, it also began supporting children, young people and families in the harbour town of Aqaba and in the northern city of Irbid.

Many challenges remain in a thriving tourist destination 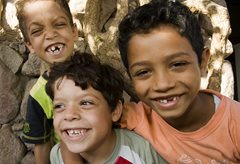 Children grow up in families with their brothers and sisters (photo: SOS archives).

Aqaba is a city of over 100,000 inhabitants located on the southern coast of Jordan, near the border with Israel, at the head of the Gulf of Aqaba. It is the country’s only port and is also a popular tourist destination.

Despite Jordan’s generally stable economy and developing industry, unemployment levels remain high, particularly for young people. According to a UNICEF report, some of the main reasons why it can be so difficult for young people to find employment are a lack of career guidance, a lack of jobs that match university qualifications and skills, as well as cultural obstacles that hinder women’s full integration into the labour market. Less than twelve per cent of Jordanian women currently participate in the economic sector.

Not everyone in Aqaba benefits from the wealth tourists bring to the region. Shalala, for example, is an economically-deprived community which is inhabited mostly by Palestinian refugees from Gaza. They do not have Jordanian citizenship and therefore do not benefit from social services such as health care and free education. Over the past years, thousands of Syrian refugees have also arrived in the area. For children, this situation is particularly difficult as they are not only torn from their homes and the environment they are familiar with, but many of them have experienced violence and traumatic events. Refugee families find it hard to find shelter, work and enough food to survive. An increasing number are forced to beg for money.

The second SOS Children’s Village in Jordan was opened in 1991 in Aqaba. Today, the SOS Social Centre here serves the residents of the children’s village as well as members of the local community and hosts a range of cultural, educational, music and fine arts activities. The aim of the centre is to strengthen the links between the SOS Children’s Village Aqaba and the local community. SOS mothers and children, as well as women and children from the neighbourhood, make use of the social centre’s library, computer lab, internet services, drawing studio and music club. We consider these activities an important aspect of ensuring the well-rounded development of children.

What we do in Aqaba 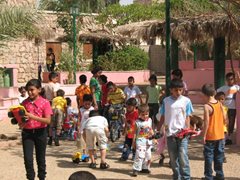 SOS Children's Villages provides a secure environment where children can play together (photo: SOS archives).
In addition to the family-strengthening programme mentioned above we provide the following support:

Family-based care: Children from the region who are no longer able to live with their parents, nine SOS families can provide a loving home for children. In each family, the children live with their brothers and sisters, affectionately cared for by their SOS mother.

Education: Around 200 children from both the children’s village and the neighbourhood attend the SOS Kindergarten, ensuring that children from SOS families make friends and are integrated into the local community from a young age. The provision of day-care is particularly valued by parents who need to go out to work or look for a job during the day, as they can leave their children in safe hands.

Support for young adults: When young people who grew up in one of the SOS families feel ready to move out of home in order to study, receive training or work, the SOS Youth Programme continues to support them as they make the transition into independent adulthood. The young adults live together, in our houses for boys and for girls, supervised and guided by a qualified SOS counsellor.