The Israeli SOS Children's Villages Association was founded in 1977 in order to look after children who had lost parental care. The organisation started working with children and young people in Arad, and later, in 1997, in Midgal HaEmek. The work of SOS Children's Villages has adapted to meet the changing local needs. We provide family-based care for children who have lost parental care and support young adults until they are able to live independently. We also assist families and children in the community.

In a diverse society, many groups remain very vulnerable 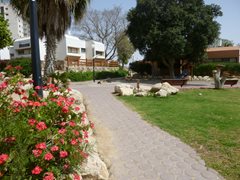 The city of Arad is in the South District of Israel, around half an hour's drive from the Dead Sea. The city has a diverse population including Ashkenazi, Sephardi, Religious and Secular Jews, as well as Bedouins, amongst others.

In Israel, most of the country's wealth is concentrated in the country's centre. Over the past few decades, the periphery has seen a drastic decline in both social and economic conditions. There are many vulnerable population groups in the region. It is often difficult for families from these communities to break the cycle of poverty.

Near Arad, there are numerous Bedouin villages. The Negev Bedouins are a semi-nomadic, pastoral tribe who have lived in the Negev Desert for centuries. Today, around 180,000 live in the Negev, making up around a third of the region's population.

A large number of Negev Bedouins live in poverty, unemployment rates are high and access to health care is limited in more rural areas. Various government measures have been introduced in order to improve the lives of the Negev Bedouins and education is seen as one of the main ways in which this can be done.

SOS Children’s Villages began its work in Arad in 1981 with the establishment of the SOS Children's Villages in Neradim. Working with the Ministry of Welfare, SOS Children's Village Neradim offers a home to children, who are not able to live with their biological families; many of the children have removed from their homes by social services. The children have, in their short lives, already experienced serious trauma or may have serious educational gaps. A unique individual development plan is designed for each child to ensure that they have the chance to receive an education and grow up into healthy and independent adults. We make sure all their needs are attended to, for example by providing psychological care, as well as extra tuition for those struggling at school. We want to further the children’s creative, social and educational skills, and we offer a range of activities, including sports, music, arts and crafts, computer and English lessons, theatre, and many more.

What we do in Arad

A girl in our care says thank you for having the chance to grow up feeling protected (photo: SOS archives).

We have been supporting vulnerable children in Arad for over 30 years.

Care in families: Today, children from the region who are no longer able to live with their parents can find a loving home in one of 13 SOS families at the SOS Children’s Village. In each family, the children live with their brothers and sisters, affectionately cared for by their SOS mother.

Education: The children attend the local schools together with children from the neighbourhood, ensuring that they make friends and are integrated into the local community from a young age.

Support for young people: When young people who grew up in one of the SOS families turn 18 or when they finish high school, the SOS Youth Programme continues to support them as they make the transition into independent adulthood. The young adults often maintain close contact with their SOS mother and siblings.

Emergency care: In 2008, an emergency shelter was opened. The shelter is open 24 hours a day and provides an immediate solution to children who are in need of urgent care. The children are given a safe home while decisions regarding their further long-term care are being made.

Supporting the local community: In addition, we have recently opened six day-care and after-school centres for children from the Bedouin communities surrounding Arad. The children are offered activities, clubs, tutoring, and therapy sessions.