The Israeli SOS Children's Villages Association was founded in 1977 in order to look after children who had lost parental care. The organisation started working with children and young people in Arad, and later, in 1997, in Midgal HaEmek. The work of SOS Children's Villages has adapted to meet the changing local needs. We provide family-based care for children who have lost parental care and support young adults until they are able to live independently. We also assist families and children in the community.

Conflicts affect the families and children living in the region 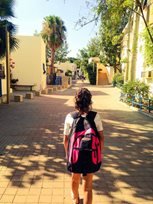 A young girl in our care coming home from school (photo: SOS archives)
The State of Israel has approximately 8.3 million inhabitants (2014 est.). Most of the population is Jewish (75 per cent), around 20 per cent is Muslim and about four per cent is Christian.

Israel is situated in the Middle East, and has borders with Egypt, Jordan, Lebanon, Palestine and Syria. All these countries have experienced, or continue to experience, instability and violence. The lives of children and families in the region are continuously affected by these disputes.

A high level of poverty in spite of a strong economy

Israel is mainly a service-based economy – the sector employs 82 per cent of the labour force. The country has also developed its agriculture and industrial sectors, in spite of limited natural resources. Industry employs 16 per cent of the working population. At present, agriculture employs two per cent of the population and they produce fruit, vegetables, cotton, meat and dairy products.

Although, in general terms, Israel has a high and improving standard of living, there is a widening wealth gap. Israel has the second highest wage gap of any Organisation for Economic Cooperation and Development (OECD) country; nearly a quarter of the population lives below the nationally-defined poverty line. This includes 439,500 families. The official unemployment rate was 5.8 per cent in 2014, however the real figure is believed to be much higher

Children are affected by poverty

Demographically speaking, Israel is a young country: 28 per cent of the population is under the age of 14. Recent social changes have affected the lives of children, especially as economic crises and political conflicts have led to cuts in spending in social welfare programmes.
Israel ratified the UN Convention on the Rights of the Child in 1991, and although many measures have been introduced and implemented to improve the lives of children, the country has one of the highest rates of child poverty among the OECD countries; nearly 40 per cent of Israeli children live in poverty. In some cases their carers are working, but on a part-time basis and earning very low wages.

Israel invests over six per cent of its gross domestic product in education. Israeli children have to attend school from the age of six, and after completing secondary education most youth are conscripted into the Israel Defence Forces. 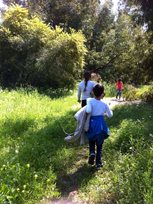 Care in families: The SOS Children's Villages in two locations - Arad and Migdal HaEmek - offer a loving home to children who are not able to live with their biological families. We work closely with the Ministry of Welfare as many of the children have been removed from their homes by social services. Children between the ages of five and eighteen grow up with their brothers and sisters and are looked after by the SOS mothers.

Support to young adults: When the children get older, they can move into our youth programmes where they are guided on their path to an independent life with the help of professionals.

Emergency care: We also run an emergency shelter in Arad that offers a short-term home to children in urgent need of care.

Support to local vulnerable children: We also offer day care and after-school activities for Bedouin children between the ages of six and twelve. The children are picked up from school and dropped off at home at the end of the day. They receive homework help, private lessons, a hot meal, and can take part in fun activities, and field trips. More programmes focusing on the community are expected to open in coming years.