Millions live in poverty in "the religious capital of India" 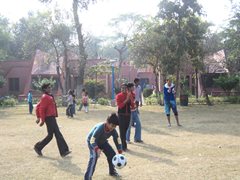 Playing with a ball in the garden (photo: SOS archives).

Varanasi is located on the banks of the River Ganges, in Uttar Pradesh, the Indian state with the largest population. It is regarded as a holy place for Hindus, Buddhists and Jains. In addition to being a cultural and religious centre, it is also an important artisan producer of saris, carpets and other handicrafts.

The population of Varanasi is growing quickly. According to official figures the city's population nearly tripled between 2001 and 2011, and is currently estimated to be over 3.2 million. There is a shortage of adequate housing and the basic infrastructure is struggling to meet the needs of the growing population.

According to some estimates just under 38 per cent of the population lives in slums in the city. Poverty, unemployment and illiteracy are common in such areas. The homes here are precarious with no access to basic infrastructure or services.

Children living in these conditions have a high incidence of sickness and malnutrition. Many risk losing parental care, as parents, who often struggle to scrape together a living, often find it difficult to meet the material and emotional needs of the children. Some of these children can be found on the streets during the day, trying to scrape together some money to contribute to the family income. For example many sell candles and flowers to tourists and pilgrims visiting the city. These children are very vulnerable as they struggle to keep safe, healthy and well-nourished.

Gender inequality continues to be an issue. According to the most recent census, the average literacy rate in the district is 77 per cent but there is a significant difference between the male literacy rate - 85 per cent - and the female one - 68 per cent. The SOS Family Strengthening Programme supports many widows, and aims its activities at women and girls in order to improve their situation. Although among the poorest, children of both sexes are often taken out of school so that they can contribute to the family income, it is still common for girls to leave school earlier than boys.

The SOS Children's Village is located in a rural area about 25 km from the city of Varanasi. We work closely with local agencies and community-based organisations in order to identify families who are in need and provide them with the support they require to improve their lives.

What we do in Varanasi

Spending time outdoors is enjoyed by all (photo: SOS archives).
A central part of the work that SOS Children's Villages carries out in Varanasi is related to supporting children and families near where our organisation is based. Our SOS Social Centres run a family strengthening programme which offers a comprehensive package of services to enable families to stay together and take good care of their children. We aim to raise awareness of hygiene and children's rights and give guidance on parenting skills. We provide families with food, as well as educational support and medical treatment. We have a sick bay which administers basic medical care to the SOS families and the people who live nearby. In order for families to generate income, we offer them vocational training, career counselling and advice on how to look for a job. For example we train people in advanced agricultural techniques and older girls are taught tailoring. We also give them financial support so they can start small businesses such as running a vegetable shop or a bicycle repair workshop.

If children can no longer stay with their families, they can find a loving home with one of the 18 SOS families, where they grow up with their sisters and brothers. Young children attend the SOS Kindergarten, while older ones attend the SOS Herman Gmeiner School to complete their primary and secondary education. In both settings children make friends with children from neighbouring families and thus integrate into the community. We have a well-equipped learning centre, which includes a library, a music room and a computer centre.

When the young adults are ready to leave their SOS families they can join our SOS Youth Programme. With the support of qualified professionals they are guided through this new stage of their lives, as they start vocational training courses, attend higher education or look for work. The young people are encouraged to develop perspectives for their future, learn to shoulder responsibility and increasingly make their own decisions.