A rise in the number of families living in poverty 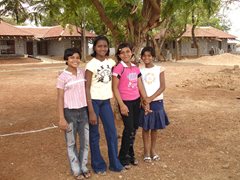 Raipur, with around one million inhabitants, is the capital of the state of Chhattisgarh. The province's economy has improved recently due to its rich mineral resources and big industries such as steel, aluminium and cement.

There is, however, an unequal distribution of wealth and, in spite of economic growth and governmental efforts, the number of families living in poverty has nearly doubled in the last ten years.

These poor families live mostly in slum areas; there are dozens of such shanty towns in the city. The housing is precarious, and there is little basic infrastructure such as safe drinking water and sanitation or access to services such as medical treatment and education. In recent years, there have been various government initiatives to improve the lives of the urban poor, but administrative delays mean that thousands continue to live in destitute conditions.

Many of the children who are taken into our programmes are facing multiple hardships. Those who are in family-based care have lost the care of their parents, sometimes to diseases such as tuberculosis, cancer and HIV/AIDS. Others have been abandoned because the parents are not able to meet their emotional and material needs.

Girls are particularly at risk of discrimination and ill-treatment. For example, girls are more likely than boys to drop out of school. Although the average literacy rate stands at a relatively high 86.9 per cent, there is a significant difference between the male rate - 92.4 per cent - and the female rate - 81.1 per cent. Worse still, is the threat of human trafficking as most victims are young girls who are promised work as domestic servants in other cities but are then forced into prostitution.

SOS Children's Villages started working in Raipur due to the harsh social and economic conditions many families faced. We approached the provincial government who donated a plot of land in an area called Manna Camp near the Raipur airport. We continue to work closely with local agencies and community-based organisations in order to identify families who are in need of our support.

What we do in Raipur

Children gardening outside their family home (photo: SOS archives).
A central part of the work that SOS Children's Villages carries out in Raipur is related to supporting children and families in the region. Our SOS Social Centres run a family strengthening programme which offers a comprehensive package of services to enable families to stay together and take good care of their children. In addition to providing day-care we aim to raise awareness of hygiene and child rights and give guidance on parenting skills. We provide families with food, as well as educational support and medical treatment. In order for families to generate income, we offer them vocational training, career counselling and advice. If self-help groups do not exist, we enable their creation. Some of the people we have worked with now make a living by making jewellery and clothes or keeping animals.

When children can no longer stay with their families, they can find a loving home with one of the fourteen SOS families, where they grow up with their sisters and brothers. The children attend the local kindergartens and schools, thus making friends with children from neighbouring families and integrating into the community. Children from local families also participate in festivals that we organise. When the young adults are ready to leave their SOS families they can join our SOS Youth Programme. With the support of qualified professionals they are guided through this new stage of their lives, as they start vocational training courses, attend higher education and look for work. The young people are encouraged to develop perspectives for their future, learn to shoulder responsibility and increasingly make their own decisions. There is also an SOS Vocational Training Centre, where young people are trained as electricians, welders, plumbers, masons or car mechanics, and to work in IT.