As people continue to arrive from Tibet, autonomous region of China,  the pressure on resources grows 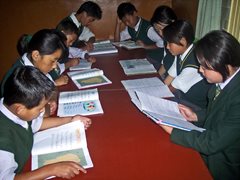 Education is taken very seriously by all (photo: SOS archives).
Tibetan Homes Foundation Mussoorie is located in the northern Indian state of Uttarakhand, about 35 kilometres from the state capital of Dehradun.

It is estimated that around 5,000 Tibetans live in Mussoorie. There are now two generations of Tibetans who have been born and brought up here. But people continue to arrive, especially after periods of unrest in Tibet.  In addition children from Tibet are often sent to Mussoorie by their parents.

Mussoorie has become a tourist centre, attracting many visitors to the beautiful countryside and the cultural and religious sites. Tibetans have therefore found a way to make a living through servicing these visitors - they act as tourist guides or run restaurants, accommodation and shops. Others make carpets and other handicrafts which are primarily sold to visitors. Although tourism has provided people with a livelihood, it has also brought some environmental problems as the infrastructure struggles to deal with the increase in people.

Many educated young Tibetans face a hard choice: although they often want to remain in the Tibetan community, they find it hard to make a living here. In spite of efforts to create income-generating enterprises, the levels of unemployment remain high.

As a result, there are an increasing number of families who struggle to support themselves.

Supporting the children of Tibet, autonomous region of China

All the children in the families have lost parental care; while some children have no living parents, others have parents who are in Tibet, autonomous region of China in other locations throughout India, or further away.

What Tibetan Homes Foundation does in Mussoorie

Happy to have the chance to grow up in a loving home (photo: SOS archives).
Tibetan Homes Foundation Mussoorie provides day-care, medical and dental treatment, primary and secondary education, vocational training as well as family-based care.

Children who have lost parental care can live in one of the families alongside their brothers and sisters. Due to the great number of orphaned and abandoned children, families may have up to thirty members and sometimes even more. Young people live in special accommodation while they start vocational training or go on to higher education.

Children from the village and from surrounding families go to the Kindergarten. As the children grow older, the school allows them to receive primary and secondary education in accordance with their Tibetan beliefs.

There is also a Vocational Training Centre which offers courses in dress-making and arts and handicrafts, so that young people can generate an income in the future.