As people continue to arrive from Tibet, autonomous region of China the pressure on resources grows 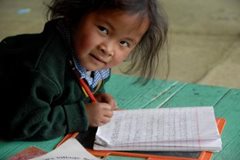 Even the youngest take education very seriously (photo: W. Herold).
Tibetan Children's Village Leh-Ladakh is situated on the river Indus, seven kilometres from the town of Leh in the Ladakh region of the Indian state of Jammu and Kashmir. The region is known for its untouched natural beauty, but it is also a harsh environment for people to live in. The area is sometimes known as "Little Tibet" due to the large influence that Tibetan culture has here. The majority of the population living in Leh are Tibetan Buddhists.

The Sonamling Tibetan settlement was established in Ladakh in 1969. Initially around 920 Tibetans arrived here. Through the decades the population has grown, and at present there are over 5,500 Tibetans living here. There are now two generations of Tibetans who have been born and brought up here. In addition, children from Tibet, autonomous region of China are often sent here by their parents.

Most of the families who first settled here were given land to live off, but as the population grew, other ways of making a living had to be found. The Indian government has promoted the area as a tourist destination - many Tibetans have therefore found a way to make a living through servicing these visitors, for example by running restaurants, accommodation and shops.

In spite of efforts to create income generating enterprises, the levels of unemployment remain high. As a result, there are an increasing number of families who struggle to make a living.

As the number of people and children arriving in the Leh-Ladakh area from Tibet, autonomous region of China, continued to increase, Tibetan Children's Villages decided to start another long-term programme in the area. All the children in our families have lost parental care; while some children have no living parents, others have parents who are in Tibet, autonomous region of China, in other locations throughout India, or even further away.

What Tibetan Children’s Villages does in Leh-Ladakh 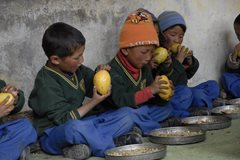 Children who have lost parental care can live in one of the families alongside their brothers and sisters. Due to the great number of children who have lost parental care,  families may have up to thirty members and sometimes even more. In order to allow the mothers to spend more time looking after the needs of the children, all the meals are prepared at a central kitchen and then distributed to the families.

Young people live in special accommodation, while they start vocational training or go on to higher education.

Children go to the Kindergarten. As the children grow older, the school provides them with primary and secondary education in accordance with their Tibetan beliefs.

The Medical Centre provides health care to those living in the  village and it is likewise open to the local community.

There is also a large Vocational Training Centre which offers courses in arts and handicrafts, so that people can acquire the skills to generate an income.