Many children have lost the care of their families

The city of Latur is located in central west India, in the state of Maharashtra about 500 km from the city of Mumbai. The economy of the region is mostly based on industry and services, but the area around Latur continues to depend mainly on agriculture and the processing of food products, especially soya beans and sugar. An estimated 2.5 million people live in Latur. According to official statistics, the population of the city increased by over 18 per cent between 2001 and 2011. Many people from other parts of India move to the state of Maharashtra with the hope of improving their lives.

Latur, however, is affected by many social problems. In spite of attempts to increase the levels of education, the literacy rate remains at 79 per cent. There is a high rate of poverty and the figures for HIV/AIDS are amongst the highest in India, with some estimates stating that the region has around 25,000 children with the disease. Furthermore, recent reports suggest that there is still a social stigma attached to AIDS: families and children suffering from the illness often face discrimination in everyday life.

Children who come into our care in Latur have either lost one or both parents, for example due to an accident or illness. In some cases they have been placed in the care of other relatives who are either too elderly or do not have the means to care for them. Some of these children come from the slums where people live without basic infrastructure or access to health and educational services. Children living in these conditions have a high incidence of sickness and malnutrition.

In September 1993, a terrible earthquake struck Latur and dozens of villages were destroyed. Many children in this region were left without parents. SOS Children's Villages arrived in the area within days and immediately started giving emergency aid to as many children as possible. At first, the children were accommodated in rented buildings. It took only a year to erect a new SOS Children's Village in the northern part of the city of Latur.

What we do in Latur

The alleviation of poverty and the prevention of abandonment of children is a high priority for SOS Children's Villages in Latur. The family strengthening programme enables children who are at risk of losing the care of their family to grow up within a loving family environment. To achieve this, we offer access to essential services for children’s development (for example educational, nutritional and health advice) and we support families so that they can protect and care for their children. We also inform them about social security schemes and benefits. 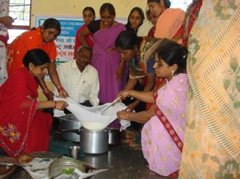 Local woman learning a new skill at the social centre (photo: SOS archives).
We aim to raise awareness of hygiene, children's rights and parenting skills. Mothers in particular are given training and advice on income-generating activities. We run a child-care centre where children can be looked after while their parents receive training or go to work. Women who have taken part in our programmes have then gone on to open small businesses such as sari shops or goat farming.

We pay special attention to families affected by HIV/AIDS. We provide them with support, but also raise awareness in order to improve the public's attitude towards people living with HIV/AIDS.

Children who can no longer live with their families can find a loving home in one of the twelve SOS families. They attend the local schools alongside children from the neighbouring area. As the children grow older, they can join the SOS Youth Programme, where, with the support of qualified professionals, the young people develop perspectives for their future, learn to shoulder responsibility and increasingly make their own decisions. They are encouraged to develop team spirit and build up contacts with relatives and friends, as well as with the relevant authorities and potential employers. Young people who move out of the SOS housing can continue to receive financial support until they are able to live independently.