The Cambodian SOS Children's Village Association was founded in 2000. The organisation first started working with children without parental care in the capital city of Phnom Penh. Due to the high levels of poverty and deprivation in the country, the organisation has continued to grow and now supports children, young people and families in six locations in Cambodia.

SOS Children's Villages started negotiations with the government in Cambodia in 1999 and the Cambodian SOS Children's Village Association was founded in 2000. When we first started working here, the country was recovering from a succession of conflicts which had a devastating effect on the life of Cambodians.

Children playing in the garden of the children's village (photo: A. Halbhuber)
Phnom Penh is the capital city of Cambodia. It is located in the southern central part of the country and is home to an estimated 2.2 million people. As an economic centre, it is one of the richest cities in the country, however, the wealth is unequally distributed and urban poverty, malnutrition and unemployment are actually increasing.

Life in the rural areas of Cambodia continues to be harsh and therefore many people move to urban centres in an attempt to improve their quality of life. However, it is not easy for these newly-arrived migrants to survive in the city. As the economy has grown, the cost of living in general, and food and housing in particular, has also increased. It is estimated that around 20 per cent of the current population of the city lives in informal settlements.

Women and children are the worst affected by these precarious social and economic conditions. Many women are responsible for supporting their families, although many find it hard to get a job as they are often forced to drop out of school at an early age and therefore have no skills. Many of those arriving from rural areas end up begging on the streets or selling small goods. Others are forced to work as commercial sex workers.

Children often do not go to school because the parents cannot afford it; instead they have to contribute to the family income by either begging or hawking on the streets. These social and economic conditions have a huge impact on family life, and many fall apart, leaving children without parental care. There is an increasing number of children who actually live on the streets, addicted to substances and exposed to violence and exploitation.

Providing families with the support they need

SOS Children's Village Phnom Penh is situated on the outskirts of the old city in an area called New Phnom Penh. The children in our care are not able to live with their families for different reasons: some have lost either one or both parents during the armed conflicts or due to illness; in other cases parents are unable to meet the children's emotional and material needs. For example, many children who join our family-based care suffer from vitamin deficiency and skin diseases. In addition to treating their malnutrition and giving them vaccinations, we provide them with tender loving care so that they can get better. These children often have not been to school at all, or only intermittently, and so we prepare them to join mainstream education.

What we do in Phnom Penh 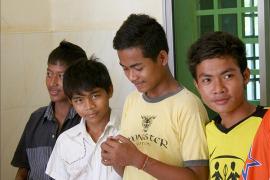 Young men who are preparing for an independent life (photo: A. Halbhuber)
SOS Children's Villages runs a number of activities in Phnom Penh: in addition to family-based care we also run a kindergarten, a school and a programme for young people. Our programmes are designed to meet the needs of the families and children who live in the area, for example our day-care services and educational programmes are much valued by the local community. Children from poor families are awarded scholarships so that they can go to school.

For children whose families can no longer take care of them SOS Children's Villages provides a loving home in one of the 13 SOS families, where they grow up with their brothers and sisters and are cared for by an SOS mother. The children attend the SOS Kindergarten, where they are taught together with children from local families. To parents who have to earn a living it is very important to have professional day care for their children, so that they are not forced to leave them unattended while they are at work. Older children attend the local primary school. The school was built and run by SOS Children's Villages but has now been transferred to the local authority. The SOS Hermann Gmeiner secondary school was opened in 2010 and can educate up to 480 pupils. Both schools provide children with a sound education and help them become part of the community.

When young people are ready to move out of the SOS families they join our SOS Youth Programme when they start vocational training or go on to higher education. With the support of qualified professionals, the young people develop perspectives for their future, learn to shoulder responsibility and increasingly make their own decisions.
There is also an SOS Mother and Staff Training Centre under construction, where future SOS mothers and co-workers will receive training before they start working with and supporting the children in our care.