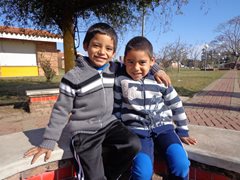 Children in our care grow up with their siblings (photo: A. Heimann).

Salto, capital of the department of the same name, has a population of over 100,000 and is located in north-western Uruguay on the border with Argentina. The economy of the region is based mainly on agriculture, especially the growing of citrus fruits.

In Salto, too, as in other Uruguayan cities, thousands of people live in so-called “cantegriles” – shantytowns on the outskirts of the city that lack basic infrastructure, where people live in precarious, makeshift housing. Most people here are rural migrants who have come to the city in search of work and a better life but, more often than not, the reality they face stands in stark contrast to these dreams.


Children from the poorest families need support and encouragement

What drives many families to the city is the high rate of rural poverty in Uruguay, the Salto department being one of the regions with the highest rates of poverty. Those most affected are young people who lack economic resources or the necessary education to generate enough income, as well as small farmers who are finding it increasingly difficult to compete with large-scale plantations and, finally, single-mothers and their children.

Growing up in such conditions can have grave effects on a child’s healthy physical and psychological development. A childhood of deprivation can severely hamper a child’s self-esteem, which can lead to unfulfilled potential and underachievement as an adult.

In addition, such children are incredibly vulnerable to sexual exploitation and child trafficking, especially here in the border areas. Though they may not be immediately visible in Uruguayan society, problems such as these continue to threaten the lives of countless children.


What we do in Salto 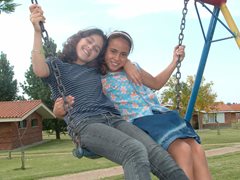 Sisters playing together (photo: A. Heimann).
SOS Children’s Villages began its work in Salto in 1985. Our social centres here offer a family strengthening programme, which aims to alleviate hardship in the community in a holistic and sustainable manner. Our services include a day-care centre where children between the ages of 18 months to three years can be looked after while their parents are at work. In addition, there is also a kindergarten for toddlers and the Children’s Club supervises children of school age before and after school hours.

There is also a clinic in the village that is open to the community and provides basic medical care to those who couldn’t otherwise afford it. The sporting centre in the children’s village, too, is open to all members of the community.

For children from Salto who are no longer able to live with their parents, SOS families can provide a loving home. In each family, the children live with their brothers and sisters, affectionately cared for by their SOS mother. The families keep fruit and vegetable gardens and raise chickens, which contributes to their self-sufficiency.

When young people from the village feel ready to move out of the family home in order to pursue further education or vocational training, our youth programme makes shared accommodation available to them. With the support of qualified counsellors, the young people live together and learn to take responsibility, plan for their future and prepare for independent adult life.