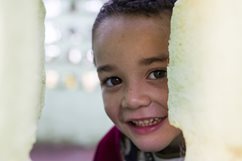 Children who have lost parental care find a loving home in one of the SOS Children's Villages  (photo:S. Verhaert)
The Republic of Uruguay is situated in the south-east of South America. It borders Brazil in the north and east, the Atlantic Ocean in the east, Argentina in the west and the extensive estuary of the Río de la Plata in the south. During the colonial period, Spanish settlement in Uruguay was fairly limited, mainly due to the absence of gold and silver in the region. Initially claimed by Argentina but later annexed by Brazil, Uruguay finally declared its independence in 1828.

Owing to mass immigration from the old continent in the late 19th century, most Uruguayans are of European origin. The country saw years of repressive military rule between 1973 and 1985. However, present-day Uruguay is one of the most stable nations in the region. In 2002, neighbouring Argentina went through an economic crisis of unprecedented magnitude.

Since the Uruguayan and Argentinian economy are inextricably tied together, the economic meltdown that shook Argentina also drove Uruguay into recession. According to the Democracy Index, Uruguay is the only Latin American country that is considered to be a “full democracy”. Montevideo, a city of roughly 1.8 million, is not just the capital of Uruguay; it is also an important port and the country's commercial centre.

A high standard of living
Both politically and economically, Uruguay is perceived as one the most stable and developed countries in Latin America. No other nation in the region is more supportive of democracy and more satisfied with the way it works than Uruguay. In 2008, 82 per cent of Uruguayans supported democracy, stating it was their preferred political system. The country's adult literacy rate is among the highest in Latin America, a result of the population's wide access to education.

Uruguay is characterized by a comparatively large middle-class and income inequalities may not be as pronounced as in other Latin American countries. In fact, the Gini coefficient for Uruguay shows that wealth is more equally distributed than in Portugal. Nonetheless, the economic crisis in 2002 did have an impact on the country's poorest: in a country that was once known as “The Switzerland of Latin America”, roughly 10 per cent face a life in poverty.

In 2007, during the worst flooding the country had seen in 50 years, 12,000 people had to be evacuated from their homes. Most people affected by the disaster came from poor, disadvantaged communities. Public infrastructure, such as water supply, sewer systems and power lines, was severely damaged by the flooding.

Vulnerable children are in need of protection
In 2007, more than 99 per cent of children between the ages of 6 and 11 attended primary school, one of the best figures in Latin America. Although access to education is generally good, Uruguay is marked by significant educational gaps. In rural areas, dropout levels are as high as 27 per cent. High dropout rates are particularly common among the poor. Since education is often seen as the key element in helping children develop their full potential, failing in school often has relevant poverty and inequality implications for the child's adult life. 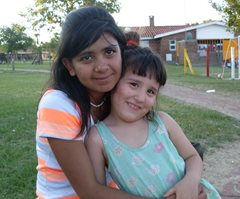 Sisters growing up together in the care of SOS Children's Villages (photo: A, Heimann)


Child poverty may not be as visible as in many other Latin American nations. However, the sight of children forced to work and beg in the streets to help support their parents is not uncommon in Uruguay.

The HIV/AIDS prevalence rate in Uruguay is roughly 0.5 per cent. However, the number of new infections has been on the rise over the past few years. Among the most vulnerable sections of Uruguay's population to contract HIV/AIDS are commercial sex workers, street children and injection drug addicts. They show a rather high HIV/AIDS prevalence rate of around 5 per cent. Orphans who have lost their mother due to HIV/AIDS face a high risk of ending up in poverty. They also frequently have to deal with discrimination, abuse and neglect by other members of society.