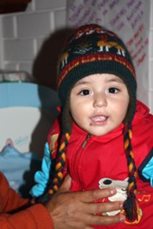 In safe hands with his SOS family (photo: M. Obholzer)

Pachacamac is located 40 km southeast of Lima. It has just over 50,000 inhabitants and a very young population, with 92.28 per cent under the age of 54. Although the area attracts a lot of tourism thanks to its Huari archaeological sites (600-800 CE), it remains one of the country’s poorer areas with 41.7 per cent of the population living in poverty. More than a quarter of the houses here are so-called “improvised homes”, which are often lacking in safety and basic facilities; just over ten per cent have running water, for example.

Despite the Peruvian government’s efforts to eradicate the worst forms of child labour, it remains a problem here, as in most of country. Poverty, instability within the family, or a missing parent are among the causes that expose children to work from an early age. Child labour can lead to dropping out of education, which in turn decreases the potential earnings in adult life.

Only around a quarter of the population in Pachacamac has completed secondary education. Often, parents cannot afford to formalise their business or do not hold the necessary qualifications to get a formal job, and their children become the victims of this cycle of poverty. They, too, miss out on education as they have to contribute to the family income.

In many cases, however, it is not only the socioeconomic situation of the family that causes children to work, but also certain underlying attitudes. Support and education in the community are needed to change the widely-held view that children are merely small adults, to ensure that child labour is no longer socially acceptable or tolerated, and to safeguard education, health care, and a loving and safe family home for every child.

What we do in Pachacamac 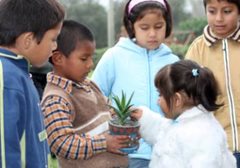 Efforts to alleviate hardship in Pachacamac began in 1997. In order to ensure long-term funding of the project and to guarantee its high-quality educational standard, the German couple who first began the work here decided to hand over the village to SOS Children's Villages in 2004.

SOS Children’s Villages strives to provide support and education to families and children in the community of Pachacamac. The activities here include workshops where carpentry, tailoring and gardening are taught. There is also a vegetable garden and small animals such as poultry and rabbits are kept.

For children in Pachacamac whose parents are no longer able to look after them, eight SOS families can provide a loving home for up to 72 children. They live with their brothers and sisters and are affectionately cared for by their SOS mothers.

Shared housing is made available to young people who are ready to leave their SOS family in order to pursue further education or vocational training. They are supported by qualified counsellors in planning their future, learning to shoulder responsibility and increasingly making their own decisions.