In Lima, thousands of children never get to experience what it is truly like to be a child

Toddlers are now in good hands while their mum is at work. (photo: SOS archives)

Peru remains a country of extreme contrasts, especially in the capital. While a small proportion of limeños belong to the wealthy upper class, the bulk of Lima's population is struggling to survive in the shantytowns. Although the situation has improved over recent years, nearly 60 per cent of Peru's children continue to live in poverty.

For decades, people from rural areas have migrated to Lima in search of work, creating settlements on the hills surrounding the city. These shantytowns often have no electricity, access to drinking water, let alone decent housing infrastructure. Millions of children are deprived of a loving, affectionate family environment. A high number of them have lost parental care and many more are at risk of losing it.

Despite the fact that the Peruvian government has introduced a number of programmes to eradicate the worst forms of child labour, it remains a serious problem. All over the city, children can be seen washing car windshields at traffic lights, shining shoes or selling merchandise.

Children simply aren’t a priority at any level of government; rather, it is a commonly held view that children are merely small adults. Child labour is often viewed not only as economically necessary but also as socially acceptable. It is therefore necessary to provide support and education to parents and children in order to change fundamental attitudes concerning child rights.

53 per cent of the population of San Juan de Lurigancho are below the age of 29. It is also the district with the highest percentage of people living in extreme poverty.

Like many towns in the Lima metropolitan area, Zárate was founded during the great wave of migration from rural areas to the capital that began in the fifties. Many worked as informal street vendors or dependent labourers and, to this day, only around 50 per cent of local businesses are formally registered.

This precarious lifestyle often leads to domestic violence and family break-ups, leaving mothers to care for their children on their own. With no financial support, however, these women have to take on informal work whenever they can, placing their children with relatives for the day, or simply leaving them home alone.

What we do in Lima 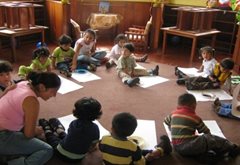 Strengthen families: The SOS Family Strengthening Programme aims to alleviate hardship in the local community and thereby allow children to grow up with their families. There are also day-care centres for pre-school children, making it possible for the children's mothers, most of whom are single mothers, to go to work and make a living for themselves and their children. We also offer evening classes and training for adults, and provide basic medical care.

Care for children who have lost parental care: For children whose parents are no longer able to look after them, SOS Children’s Village Lima offers SOS families, where children can find a new loving home.

Support for young people: We continue to support young people until they are able to live independently. We assist them while they complete their schooling, vocational training or university studies.