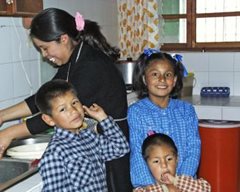 Huancayo is a city of almost 350,000 in the central highlands of Peru, located at an altitude of 3,271 meters above sea level. It is Peru’s fifth largest city and the central highland region’s most important commercial centre. Like most highland cities, Huancayo was at the heart of the socio-political conflict of the 1980s and ‘90s and was at one point occupied by two opposing guerrilla groups.

Due to the city’s increasing economic importance over the past decades, it has attracted a steady stream of internal migrants, mainly from neighbouring departments. In fact, almost 40 per cent of the population are of migrant background. Often, these families leave their traditional, rural lifestyles behind to seek a better life for themselves and their children in the city. In many cases, however, once they arrive in their new hometown, they are unable to find formal work. In Huancayo, up to 65 per cent of the working population do not have an employment contract, and many found their own micro-enterprises. To make a living this way, people often have to work well over 60 hours per week, leaving them little time to take care of their family. Poverty in the region remains high at around 35 per cent, which is above the national average.

Despite the Peruvian government’s efforts to eradicate the worst forms of child labour, it remains a severe and highly-visible problem in Huancayo. All over the city, even very young children can be seen selling sweets for 3 euro cents apiece. They roam the streets unsupervised, late into the night, which makes them extremely vulnerable to violence and exploitation. Although the reason for parents’ willingness to accept this is mainly of an economic nature, the fact that child labour is largely tolerated in the country is also part of the problem.

What we do in Huancayo

In safe hands at the day-care centre (photo: F. Espinoza)

SOS Children’s Villages began its work in Huancayo in 2000. Our social centres here offer a holistic and sustainable family strengthening programme that aims to alleviate hardship in the local community. A day-care centre and childminding programme make it possible for parents to leave their children in safe hands while they go out to make a living. In addition, the centre offers information workshops and evening classes for adults. Medical care is also available to members of the community.

For children from Huancayo who are no longer able to live with their parents, 13 SOS families can provide a loving home for up to 117 children. They live with their brothers and sisters and are affectionately cared for by their SOS mothers.

When young people are ready to leave their SOS family in order to pursue further education or vocational training, shared housing is made available to them in town. Here, the young people can plan their future, learn to shoulder responsibility and increasingly make their own decisions, all the while supported by our qualified youth counsellors.