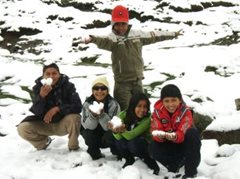 SOS siblings on a trip up the mountain (photo: F. Espinoza)

The city of Ayacucho is the capital of the Ayacucho Department and is an agricultural, manufacturing and educational centre. It is situated in a fertile valley on the eastern slopes of the Andes at 2,746 metres above sea level. Over the last decades, Ayacucho experienced a tremendous demographic explosion caused by forced internal migration. In the 1980s and ‘90s, the rural population in the region suffered extreme violence due to Peru’s internal conflict involving the “Shining Path” guerrilla insurgent organisation. Many had no choice but to leave their homes and traditional lifestyles behind and flee to the city.

These political refugees settled on the outskirts of Ayacucho, where they lack basic facilities such as water, sanitation and electricity, which in turn leads to an increase in infectious diseases. Unemployment is also high and can result in poverty, family break-ups and violence, malnutrition or even the abandoning of children. The violence experienced during this time has also left deep scars in the population, creating a culture of fear and distrust, and a deep-seated pain that remains visible to this day, for example in the huayno music of the region.

Ayacucho is one of the poorest regions in Peru with an overall poverty rate of 68.3 per cent, and nine in ten household living in poverty in rural areas. Some of the reasons for this are the lack of agricultural land, financing and knowledge about commercialisation, insufficient access to formal work for low-income families and limited development of micro-enterprises.

Another problem is the poor level of education in the region: 17 per cent have received no formal education whatsoever. Illiteracy has decreased from 45.1 per cent in 1981 to 17.9 per cent in 2007 but it remains high in rural areas at 27.2 per cent.

What we do in Ayacucho 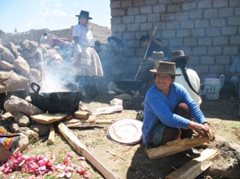 SOS Children's Villages has been active in Ayacucho since 2006. Our family strengthening programme, which we offer at the SOS Social Centre here, focuses on children under the age of five and their mothers, particularly those living in conditions of extreme poverty. The objectives of our programme are, in the first instance, to improve the nutritional condition of children and provide integral health care. There are also measures to prepare young children for starting school, and to improve the income situation of parents through basic skills training. Childminding is offered so that parents can leave their children in safe hands while they go out to work. The main goal of the programme is to prevent children from being abandoned by their biological relatives due to their difficult social situation.

For children in Ayacucho who are no longer able to live with their parents, fourteen SOS families can provide a loving home for up to 126 children. They live with their brothers and sisters and are affectionately cared for by their SOS mothers.