Many people have no regular income

Practicing for the orchestra at SOS Children's Village Hohenau (photo: F. Espinoza).
The Republic of Paraguay is one of the two landlocked countries in South America. It shares borders with Bolivia in the north, Brazil in the east and Argentina in the south and the west. Paraguay, one of Latin America’s least densely populated countries, is made up of 18 departments. Its total population amounts to 6.7 million, many of which are living in the country’s capital, Asunción. Its central location in the Americas has led some people to refer to Paraguay as "El corazón de América" ("The heart of America").

The country’s economy is characterised by a large informal sector – thousands of microenterprises and street vendors play an important role in Paraguay’s urban centres. Interestingly, Paraguay is one of the top five soy-producing countries in the world. Dictator Alfredo Stroessner ruled Paraguay with an iron fist for over thirty years, which makes him the second longest serving Latin American leader of the 20th century after Fidel Castro. His presidency was marked by human rights violations and repression but also saw economic and political stability. Stroessner was overthrown in a military coup in 1989 and fled into exile.

Paraguay is one of the poorest nations in the Americas. Nearly 40 per cent of the people face a life in poverty. Many of them lack sanitation, clean water, electricity and decent housing. The country is currently ranked 111th by the United Nations Human Development Index (HDI), an index that evaluates development in a country by looking at three key indicators: health, income and education. Despite recent efforts of the Paraguayan government to implement wide-reaching alphabetisation programs, an estimated 210,000 Paraguayans are still considered illiterate.

Over the years, involuntary domestic servitude of adults and children has become a severe problem in Paraguay. Many young children are subject to forced labour, particularly in the Chaco region. Poor children are being trafficked from rural areas to larger cities such as Asunción or Ciudad del Este where they experience commercial sexual exploitation and are treated like modern-day slaves. Human-trafficking recruiters specifically target street children, knowing that without family support they are particularly vulnerable. Trafficking of Paraguayan and Brazilian adolescents for commercial sexual work is commonly observed in the Tri-Border Area of Brazil, Argentina and Paraguay.

Children without parental care are in need of protection 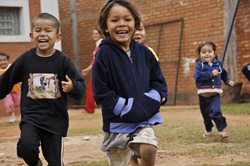 Paraguay is, demographically speaking, a very young nation: roughly 35 per cent of the country’s population is less than 14 years old.

Just like in many other Latin American countries, a large number of Paraguayan children face great hardships as they go through life. The experience of growing up in a dysfunctional family or without family structures at all will often have an impact on a child’s adulthood.

Around 150,000 children in Paraguay are orphans. Without parental care, many of them end up in the streets where they often resort to robbery, begging or prostitution in order to survive. Deprived of a caring, supportive environment and education, they enter a vicious circle of drugs, gang-related violence and abuse. Society often perceives street children as parasites to get rid of rather than as vulnerable, neglected human beings who grow up without family support. The social stigma of being an orphaned street child will strongly affect a child’s psychological development.

A child’s life in the streets of Asunción is tough. However, as rural areas in Latin America are often characterised by even more striking levels of poverty, growing up in the countryside is not any easier. In Paraguay’s rural areas, basic resources such as drinking water are sometimes scarce. In the country’s semi-arid zones it only rains between November and March. During the dry period, rural families often do not have access to clean water. It is not uncommon for children to die from severe diarrhoea after drinking contaminated water.

At 22 per 1,000 live births, the under-five-mortality rate for Paraguay is above the regional South American average. Many Paraguayan children are deprived of basic education: primary school enrolment figures have been on a constant decline over the past few years.

Over the years, SOS Children’s Villages Paraguay has constantly been extending its activities in the country. The organisation now supports Paraguayan children, young people and their families in six different locations by providing day care, education, and vocational training. Children whose parents cannot take care of them will find a loving home in one of the SOS families. In 1993, SOS Children’s Village Panambí, located in San Ignacio, went into operation. In Panambí, our organisation offers long-term care and support for children with disabilities.