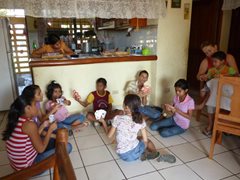 An SOS family at home (photo: I. Vasquez)

David is the capital city of the Chiriquí province in westernmost Panama, bordering Costa Rica. The city has a population of approximately 180,000. In David itself, the commercial sector employs most people, but the region overall relies predominantly on agriculture and cattle raising.

34.6 per cent of the population of Chiriquí lives in conditions of poverty, meaning they are unable to meet basic needs such as food and sanitation. Rural poverty remains a great problem, and many migrate to the city in search of opportunity. However, they are often unable to find work and their living situation further deteriorates.

It is also not uncommon that children are made to work in order to help the family survive. In Chiriquí, over 4,000 children are estimated to engage in child labour activities. 58 per cent of them do not go to school. In rural areas, an estimated 75 per cent of children and young people participate in the harvest, during which time they are also likely not to attend school.  These factors have profound effects on the physical, emotional and intellectual development of a child - effects that will impact a child’s entire future life as an adult.

Around 20 per cent of children in Panama are born to mothers younger than 19 years of age. When these young mothers are from underprivileged backgrounds themselves, they are often unable to provide for their children. In the very worst cases, their desperate situation can even lead them to abandon their children.

These children need a loving home where they receive the care and attention they deserve, and young people need support so that they can finish their education and look into their futures with confidence and hope.

What we do in David 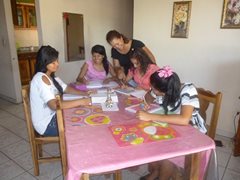 Learning to be independent (photo: I. Vasquez)

SOS Children’s Villages began its work in David in 1999 due to the high number children who had lost parental care in the region. 13 SOS families can provide a loving home for children who are no longer able to live with their parents. In each family, they live with their brothers and sisters, affectionately cared for by their SOS mothers. The children attend schools in the vicinity, so they are very much integrated into the local community from a young age.

When young people from the village feel ready to move out of the family home in order to pursue further education or vocational training, the SOS Youth Programme makes shared accommodation available to them. With the support of qualified counsellors, the young people live together and learn to take responsibility, plan their future and prepare for independent adult life.