Colón is the economic heart of Panama, but not everyone benefits from this 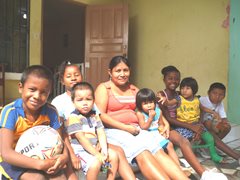 An SOS family from Colón (photo: I. Molinar)

Colón, capital of the province of the same name, is located on the Caribbean coast of Panama and has a population approaching 233,000. The city is near the Atlantic gateway to the Panama Canal and is home to the Colon Free Zone, where large quantities of merchandise are traded duty-free. This, in addition to the city’s ports, makes it of great commercial importance to the country.

Rather than bringing wealth to the region, however, many argue that the free zone has only augmented inequality of income distribution. Panama is an extremely unequal society: the wealthiest 20 per cent of the population consume over 50 per cent, while the poorest 20 per cent consume only 3.6 per cent. In Colón, 42.7 per cent of the population live in conditions of poverty. Crime rates are also some of the highest in the country here, especially amongst young people.

Many sectors of society are still marginalised

It is the rural and the indigenous population that is most severely affected: a shocking 96 per cent of the indigenous population live below the national line of poverty. Many of them migrate to the larger cities, such as Colón, in search of work and a better life. However, illiteracy is much higher amongst these groups (between 30 and 40 per cent) and the income they are able to generate is therefore approximately five or six times less than the national average. For families living in these conditions, providing the care their children need often becomes impossible. 16 per cent of children under the age of five in Panama are chronically malnourished, and countless children have to work to help the family survive and thus miss out on education.

Although the Panamanian government has invested in social programmes to a larger extent than other countries in the region, reducing poverty and creating opportunity for the poorest members of society remains a great challenge. The work SOS Children’s Villages does in Colón makes a real difference to the lives of children who have lost parental care by giving them a safe and loving home and providing hope for the future.

What we do in Colón

Children have the chance to grow up in loving homes and go to school (photo: I. Molinar)

SOS Children’s Villages Colón began its work in 1998. At the time, we were running an SOS Social Centre here, which served as a transit home where children aged 0 to 12 received care and education. As Colón province does not have a programme that offers permanent care for children who live in difficult social conditions, this transit home was converted into an SOS Children's Village in 2009.

Children from the region who are no longer able to live with their parents can find a loving home in one of seven SOS families. Up to 90 children live here with their brothers and sisters, affectionately cared for by their SOS mothers.

The children attend schools in the vicinity, so they are very much integrated into the local community from a young age.