In 1972, a terrible earthquake destroyed vast parts of Managua. It was against this background that SOS Children's Villages decided to get involved in Nicaragua. Children, young people and families who had lost everything in the earthquake were the first ones supported by our activities in Nicaragua.

The city of Juigalpa is located roughly 140 kilometres east of the country's capital, Managua, in the central region of Nicaragua. It is the capital of the Chontales province. During the country's brutal civil war, the region around Juigalpa was deeply affected by the fighting between the troops of former dictator Somoza and the Sandinistas.

In Nicaragua, child labour remains a widespread problem that continues to affect thousands of children. Roughly three in five children are employed in the agricultural sector, working mainly in the banana, cotton and tobacco fields in order to support their families.

Although Juigalpa is economically better off than many other areas of the country, child poverty and child neglect persists. In and around Juigalpa, socioeconomic indicators have been traditionally poor and infrastructure remains underdeveloped. Numerous children engage in labour activities, often in the informal sector; they have to beg or sell small items in the streets. Others work in agriculture, supporting their parents in the fields; many of them are exposed to pesticides and have to handle dangerous machinery. Those who have to work during the day do not have time to attend school, while those who work at night are often too tired to actively participate in class as they constantly lack sleep.

The need to support families in Juigalpa persists

Since there was no other organisation in the region that offers extensive support to families or family-based child care for orphaned and abandoned children, SOS Children's Villages decided to increase its activities in Nicaragua and to start working in Juigalpa. Over the three decades that we have been present in the area, our programmes have developed to meet the changing needs of the local population.

What we do in Juigalpa 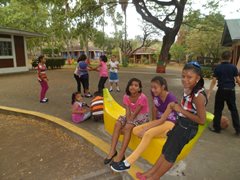 Since 1981, our organisation has been supporting vulnerable children and youths in Juigalpa in many different ways.

Strengthen Families: One of our most important aims is to assist families in order to prevent them from breaking apart. SOS Children’s Villages works with local agencies to support families so that they can stay together and take good care of their children. The participating families are organised into committees, who with our support, organise activities and provide services to meet their needs. For example, day care centres are very important to working mothers who can leave their children with professional child minders during the day while they are at work. In addition to valuable pre-school education, the children receive nutritious meals. Families can also access counselling and psychological support, as well as receive training to increase their skills.

Support for young people: We support young people until they are able to live independently. We give them access to further education and vocational training so that they have the right skills to find a job, or start their own business.