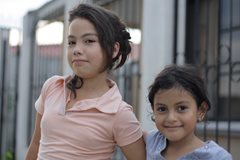 The town of Santa Rosa de Copán is located in north-western Honduras and represents the capital of the district of Copán. The SOS Children's Village Santa Rosa de Copán is situated just outside of the city. Economically, the region relies on livestock, coffee, tobacco and tea plantations. Nowhere else in Honduras is the population more affected by poverty and the harsh socioeconomic environment than here.

Poor housing conditions, undernourishment and a lack of medical attention mark the daily lives of Copán's children. Only six in ten residents of Santa Rosa de Copán have access to medical services and five in ten children are undernourished. In rural Copán, electricity is only available to seven per cent of the population. Unsurprisingly, organised gangs known as maras find it easy to recruit children and young people who grow up in such a poor and difficult environment. Once a child forms part of the maras it usually enters a vicious circle of violence, drugs and crime that is hard to break as the child becomes an adult.

In Santa Rosa de Copán, education remains an issue of great concern. The municipality's above-average school dropout-rate can be explained by the fact that many children have to support their parents economically, meaning that they engage in productive labour to help raise a higher family income. As a result, the region's primary school enrolment ratio for both boys and girls is comparatively low as well. The precarious socioeconomic situation that many families in Santa Rosa de Copán face partly explains why only a very low number of students ever complete high school.

The department of Copán is marked by a very high illiteracy rate of 68 per cent. Against this background, our organisation decided to implement an SOS Children's Village in Santa Rosa de Copán where children from the provinces of Santa Barbara, Ocotepeque, Copán and Lempira now receive support.

What we do in Santa Rosa de Copán 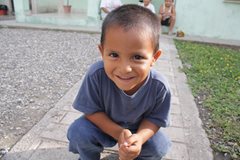 Our organisation has been providing help and support to the people in and around Santa Rosa de Copán. The SOS Children's Village Santa Rosa de Copán is situated in the outskirts of the city. As for now, it comprises 16 family houses where children can be looked after in a loving home by an SOS mother. We have been supporting children and youths in Santa Rosa de Copán since 2006.

In 2007, the premises were officially opened and inaugurated. SOS Children's Villages has also been supporting programmes implemented by the Honduran ministry of Labour aiming to eradicate child labour in the city of Santa Rosa de Copán.