Poverty shapes the lives of the majority of the population 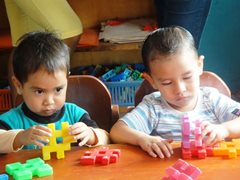 Children from local vulnerable families are cared for at the SOS Social Centre (photo: SOS archives)

The city of Portoviejo, with a population of around 230,000 is the capital of the Manabí province, located in the north-west of Ecuador. Most people live off farming, fishing and selling goods.

Manabí has always been one of the poorest regions of Ecuador: around 65 per cent live in poverty. Poverty is especially high in rural areas of the province. Thousands of families lack access to drinking water, paved roads, sewage systems, health care and electricity.

The lives of families living in Manabí were badly affected by natural disasters in 2016. In January, heavy rains caused flooding throughout the region. In April 2016, Portoviejo was one of the cities that was worst affected by the earthquake. Over 650 people died: Many families lost their homes and needed immediate shelter and support.

Children suffer from malnutrition and many are forced to work

Although the government has invested in education, over ten per cent of people can't read and write. Most children living in the city of Portoviejo go to school. However, many families in smaller towns nearby or rural areas find it difficult to get their children to school. They often can't afford the cost of transport and school materials.

At the same time, children are often forced to work. Since agriculture remains the most important source of income for many families in the Manabí region, children work in the fields and are thus exposed to dangerous machinery and pesticides.

Child malnutrition remains particularly widespread in the region: around 24,600 children are chronically undernourished. Poverty, and a lack of information on nutrition, means that these children do not receive the food they need to grow healthily. Their situation was made worse by the floods and earthquake in 2016. Both events caused a shortage of food in the area.

What we do in Portoviejo

Strengthen families: We provide day-care, training and psychological support to vulnerable families so that they can stay together. In recent years some parents have set up catering or sewing businesses and are now able to care for their families.

We also work with families of prisoners, helping them while one member is in custody.

Care in SOS families: Children without parental care find a home in one of the SOS families. In Portoviejo, brothers and sisters are cared for by their SOS parents. Some of these families live in houses integrated into the community. Wherever possible, children stay close to their family of origin and the community where they grew up. Children in our care attend the local schools and kindergarten alongside other children from the neighbourhood.

Support for young people: In Portoviejo, it is often hard for young people to become independent. We support them with housing and guidance while they attend further training or higher education.

Advocacy: SOS Children's Village works with other organisations to improve the situation of families, and to offer appropriate care to children who can't live with their parents.

Emergency Programme: After the earthquake in April 2016, we provided immediate aid to affected families and children. In Portoviejo, we gave general advice and supported families who were in an emergency shelter in the former airport. We also set up recreational and sports activities to help families recover from the stresses of their daily lives.