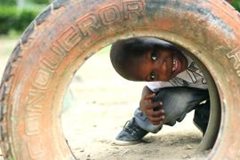 Playing in the village (photo: M.Jimenez)

Santiago de los Caballeros, capital of the province of the same name, is the Dominican Republic’s second largest city and has a population of approximately 1.3 million. It is located in the northern-central region of the country, in the fertile Cibao Valley. Its economy relies heavily on farming and livestock, with a growing services and tourism industry.

Santiago Province was historically one of the regions with the lowest incidences of poverty, but in recent years this has changed. The population has been steadily expanding, which has led to increased poverty rates: from 35 per cent in 1993, to 38 per cent in 2000, to 40 per cent in 2010. This upward trend is predicted to continue, mainly due to the great number of Haitian migrants that continue to arrive in Santiago in search of work, as well as due to the natural expansion of the population living in impoverished neighbourhoods in urban areas.

Children need to be given the chance to become successful adults

An estimated 436,000 children in the Dominican Republic work, at least 20 per cent of them in Santiago; over half of these children are between the ages of five and 13. In some cases, parents give away their child to another family, where the child then works in return for food and accommodation. This makes children incredibly vulnerable to exploitation and sexual abuse, and most of these children do not attend school.

The trafficking of humans, and especially children, across the Dominican Republic-Haiti border is a great problem and has become even more common since the devastating earthquake in Haiti in 2010. The chaos of the bi-national market days that are held regularly in the border areas provide the perfect setting for such activities. Often, parents may give away their children willingly, as they cannot afford to care for them or think their children will be better off living and working for a wealthier family. But the reality that trafficked children experience is one of exploitation and abuse.

What we do in Santiago de los Caballeros

SOS siblings having fun in the garden (photo: G. Hernández)

SOS Children's Village Santiago de los Caballeros began its work in 2003, making it our most recent programme in the Dominican Republic.

For children from the region who are no longer able to live with their parents, 15 SOS families can provide a loving home. In each family, they live with their brothers and sisters and are affectionately cared for by their SOS mother.

When young people feel ready to move out of their SOS home in order to pursue further education or vocational training, the SOS Youth Programme makes shared accommodation available to them in Santiago. In a safe environment and with the support of qualified counsellors, the young people can plan their future here, increasingly take on responsibility and prepare for independent adult life.