Where modernity and traditional lifestyles meet 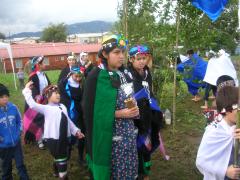 SOS Children's Village Padre Las Casas is situated in the town of the same name in the Araucanía region in southern Chile, close to the regional capital Temuco.

Padre Las Casas is the second largest town of the Araucanía region and has about 60,000 inhabitants. The region is characterised mostly by coniferous forests, and the area produces crops and fruit.

Temuco is one of the newest cities of Chile with modern infrastructure and architecture, and an important commercial downtown area. It therefore attracts many migrants from poorer rural areas looking for better living conditions.

What makes this region very unique in Chile is the strong presence of the indigenous Mapuche, who make up over 40 per cent of the population in the town of Padre Las Casas. The Mapuche were never conquered by the Spanish; in fact, they held out for over 300 years and remained independent until the late 19th century.

Today, some uphold their culture, language and traditions but most of their land has been lost and, in an ever-accelerating, modern world, it is becoming increasingly hard to survive. A growing number of Mapuches are migrating to larger cities in search of better economic opportunities but, lacking education and professional skills, many end up destitute. The large majority are still excluded from social benefits, which is one reason for the extreme poverty of the people in this area.

The Araucanía region has one of the highest poverty rates in the country. According to surveys carried out by the council of Temuco, more than half of all children here suffer abuse, and up to 90 per cent witness violence in the family home, making this the area with the highest levels of domestic violence in the country. In recent years, drug addiction has increased considerably, with consumers becoming younger and younger.

What we do in Padre Las Casas

Children enjoying themselves at the beach. (photo: SOS archives)

For children who are no longer able to live with their parents, 14 SOS families provide a loving home for up to 126 children. In each family, the children live with their brothers and sisters and are affectionately cared for by their SOS mother.

The children from the village attend kindergartens and schools in the vicinity and are therefore very much integrated into the local community.