The Maule region was affected most disastrously by the 2010 earthquake 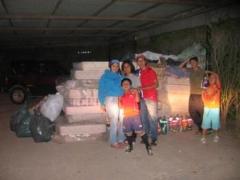 Makeshift camp after the earthquake (photo: SOS archives) Curicó is a small city of around 130,000 inhabitants, located 200 km south of Santiago in the Maule region. The city’s economy is based mainly on agricultural industry.

In 2010, a massive earthquake measuring 8.8 on the moment magnitude scale hit Chile. The Maule region was most severely affected by the quake and the ensuing tsunami. An estimated nine per cent of the Chilean population lost their homes, but in Maule, hundreds died, 60 per cent of houses were destroyed, as well as 90 per cent of its historic city centre. Many of the family houses here were made of adobe and could not withstand the catastrophe. In some cases entire families died in their collapsing homes.

Coastal areas of the region were most affected by the tsunami as there were three waves, each more than eight metres high. SOS Children’s Villages provided emergency relief, such as food, clothing, and basic hygiene products to hundreds of families, as well as offering emotional support. These emergency programmes were then gradually turned into self-sustainable development programmes run by the community itself.

The earthquake did incredible damage to the region’s infrastructure and the consequences are far-reaching. This destruction also meant that thousands of jobs were lost – and many no longer even had a home to return to.

Hundreds of small farmers and business owners lost everything in 2010. SOS Children’s Villages supports families in rebuilding their livelihoods in the area so that their children can grow up in a stable family. Children in the Maule region who have lost their parents can find a new home at the children’s village, where they can spend a safe and happy childhood.

What we do in Curicó 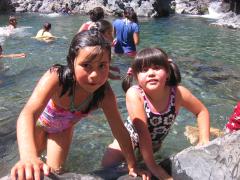 Two girls from the SOS village enjoying their holidays together (photo: SOS archives)

SOS Children’s Villages began its work in Curicó in 1996. The children’s village is located on the outskirts of Curicó in a quiet residential area.

For children who are no longer able to live with their parents,  SOS families can provide a loving home for children..There have been some recent care reforms in Chile, so that children and young people who cannot live with their parents, receive better care according to their age and gender. In SOS Children`s Village Curicó,  some children and young people between the ages of 6-18 are cared for in mixed homes, but there are also homes that are for boys only.

The children from the village attend local kindergartens and schools, which ensures that they are very much integrated into the community from a young age.