Economic prosperity is yet to reach many Chileans

The Republic of Chile's capital and largest city is Santiago. Chile’s total population amounts to approximately 17 million, of which roughly forty percent reside in Santiago.

Economically, Chile has become a prosperous nation. It is one of the leading Latin American countries in terms of competitiveness, income per capita and human development. However, wealth distribution in Chile remains highly unequal and many Chileans have not been able to benefit from the country’s economic progress.

Although poverty is falling in Chile, approximately 11 per cent of all Chileans are still considered poor by national standards. Some economists have also argued that poverty figures are actually higher than those published by the Chilean government. Those who are most affected by poverty include children, women, indigenous people and those living in rural areas. The terrible earthquake that shook Chile in February 2010 aggravated the living conditions of the country’s poor. However, severe structural poverty in Chile had already existed before the natural disaster.

A lot of poverty despite powerful economic development

Chile remains marked by persistent gender inequality. The country has one of the lowest rates of female labour force participation in Latin America. Marriage at an early age and adolescent pregnancies are still common in Chile. According to United Nations reports, roughly 12 per cent of all Chilean girls between the ages of 15 and 19 are either married, divorced or widowed.

Domestic violence against children also remains a problem in Chile: according to UNICEF, 73% of children are mistreated. The authorities and community-based organisations are working to reduce the levels of abuse, through raising awareness and providing support to families. In some cases, the family law courts may decide that it is in the best interest of the child to be taken into care. This decision is reviewed periodically and, wherever possible, the aim is to provide stability for the family so that the child can return to live with them.

Children continue to be at risk due to economic inequality 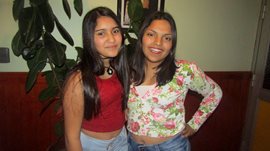 Two sisters who have grown up together in an SOS family and are planning what to do after they`ve finished school (photo: SOS archives).

At 95 per cent, Chile has one of the highest primary school enrolment figures in Latin America. However, for many families who live in rural areas access to education still proves to be rather difficult, both for economic and logistic reasons. Due to a persistently high level of economic inequality, the number of children living in poverty remains high: around 22 per cent of Chilean children under the age of 18 are poor.

Although Chile ratified the Convention on the Rights of the Child (CRC) in 1990, roughly 240,000 children in Chile still engage in labour activities. These children are often exposed to many risks, including commercial sexual exploitation.

SOS Children’s Villages started working in Chile in 1965 in the area around Concepción.

Strengthen families: SOS Children's Villages works with local organisations and communities to support vulnerable families so that they can stay together. We arrange access to basic goods and services such as health care and education. We also provide counselling, training and advice so that families can care for their children.

Care for children who have lost parental care:  If, in spite of all support, children are unable to stay with their parents, they can find a new home in an SOS family. There have been some recent care reforms in Chile, so that children and young people who cannot live with their parents, receive better care according to their age and gender. The changes vary from one region to another. Some families live integrated in the community.

We ensure that, wherever possible, children keep in touch with their families of origin. We work closely with the children’s families so that they can remain in contact and rebuild their relationship - at first, the child visits their family for short periods and slowly the time spent together increases. The family law courts will assess when the child can go back to live with their families. Once a child returns to stay with their family, we support them during this period of change and adjustment, which can often last for over six months. We monitor the situation; visiting the families regularly and making sure that they obtain the long-term support that they need to stay together.

Support for young people: We support young people until they are able to live independently. We give them access to further education and vocational training so that they have the right skills to find a job, or start their own business.

Advocacy: We work closely with other care organisation and public authorities to raise awareness of children's rights.