In one of the world’s largest metropolises, social segregation is very pronounced 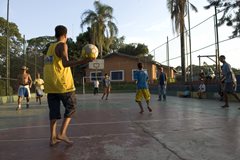 SOS Children’s Villages protects the rights of children in Rio Bonito. This includes the right to play in a safe environment (Photo: SOS archive)

The SOS Children’s Village Rio Bonito is located in São Paulo, capital of the state of the same name, on the southern coast of Brazil. São Paulo is the southern hemisphere’s largest city and has a population of over 11 million, and approaching 20 million in its metropolitan area. The so-called Extended Metropolitan Complex of São Paulo, which includes conurbations bordering the city, has a total population exceeding 29 million.

In addition to heavy air pollution and traffic congestion, this population explosion has led to a number of other critical problems. Large sections of the city developed without any urban planning whatsoever – entire neighbourhoods virtually sprang from the ground overnight. Today, around one million of São Paulo’s inhabitants live in illegal “favela” settlements. Some of these are built on precarious terrain prone to landslides or flooding, and there are even so-called “vertical favelas” – huge, run-down tower blocks where families live in overcrowded, appalling conditions.

São Paulo therefore continues to be a deeply divided and socially segregated city: a major industrial hub and important economic centre on the one hand, with cheap labour provided by the inhabitants of the many underdeveloped, underprivileged neighbourhoods.

Life in the favelas is far from easy. Crime rates have successfully been reduced in recent years, but they remain at high levels and often affect young people most severely. Those who grow up in the favelas are hugely stigmatised throughout their lives; they are viewed as criminals or drug dealers and are often met with fear by people from better-off neighbourhoods. For the thousands children born into these conditions, it can be extremely difficult to overcome these prejudices on the road to becoming a successful adult.

What we do in São Paulo 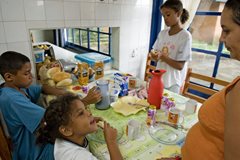 A glimpse into family life in Rio Bonito. Children having breakfast together (photo: SOS archive).

SOS Children’s Village Rio Bonito in São Paulo began its work in 1980. In order to support vulnerable children we work closely with the government, other non-governmental organisations, community groups and local businesses.

Family strengthening: The SOS Family Strengthening programmes help parents and communities so that they can care for their children and prevent families from breaking down. In partnership with the city of São Paulo, we run a childcare centre for over 300 children up to the age of four. This allows working parents and single mothers to leave their children in safe hands while they are out making a living.

Care in SOS families: For children from the area who are no longer able to live with their parents, SOS families can provide a loving home. In each family, the children live with their brothers and sisters and are affectionately cared for by their SOS mother. Both children from the village and from the local community can attend the SOS Children's Villages primary school in São Paulo, which is now run by the municipality. This ensures that children in our care are integrated into the community from a young age.

Support for young adults: When young people from the village feel ready to move out of the family home in order to pursue further education or vocational training, the SOS Youth Programme makes shared accommodation available to them. With the support of qualified counsellors, the young people live together and learn to take responsibility, plan their future and prepare for independent adult life.

Support to refugees: The Emergency Programme assists Venezuelan refugees who have arrived in Brazil. We give families a range of assistance that can include temporary shelter at the village. At the same time, we make sure that they have food, water and sanitation. We also ensure that they have access to health care, and that children can go to school.

Advocacy: In addition to providing direct support, we also work hard to promote and defend children’s rights. We are involved in local child protection initiatives and wherever possible, children and young people are directly involved in these processes.