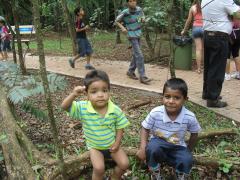 Fun and games in the garden (photo: SOS archives)

Goioerê is a small municipality of around 29,000 inhabitants located in the Paraná state in southern Brazil. Its economy is based mainly on commerce and agriculture such as the growing of soya and corn. The industrialisation of the town is advancing rather slowly, however, and most of its commerce is based on micro-enterprises.

The lack of formal employment opportunities means that most people lack job and income security which, in turn, can have detrimental effects on the stability of families and hence on the healthy physical and psychological development of a child.

Official estimates show that over 8,700 people in Goioerê are living in conditions of poverty  –that is over a quarter of the population – meaning their income is less than half of the minimum wages required to fulfil basic needs. The distribution of wealth is highly unequal, with the wealthiest 20 per cent receiving over 60 per cent of per capita income, and the poorest 20 per cent receiving only around 2 per cent. Thousands of families rely on social programmes such as the “Bolsa Familia”, and for 240 families this is their sole source of income.

Education as the ticket to a better life

Young girls often find it difficult to look after their children, partly because they lack the knowledge and support to do so, and partly because they don't have the financial means as it is hard from them to obtain formal employment. Young people need support so that they can stay in education and plan their future in a safe environment.

What we do in Goioerê 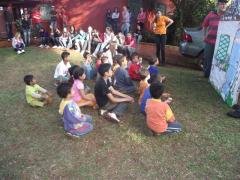 SOS Children’s Villages began its work in Goioerê in 1977 with the aim of alleviating hardship in the community and providing children with a stable and loving family home.

Care in families: For children who are no longer able to live with their parents, SOS families in Goioerê can provide a loving home. The families live in houses integrated into the neighbourhood, the children attend the local schools and this way they are part of the community. Children live here with their brothers and sisters, affectionately cared for by their SOS mother. When the children grow older, we give them training and advice so that they can find a job.

Support to refugees: The Emergency Programme assists Venezuelan refugees who have arrived in Brazil. We give families a range of assistance that can include temporary shelter at the village. At the same time, we make sure that they have food, water and sanitation. We also ensure that they have access to health care, and that children can go to school.