with silver and tin resources largely depleted, Oruro is nothing more than a stopover for many migrants 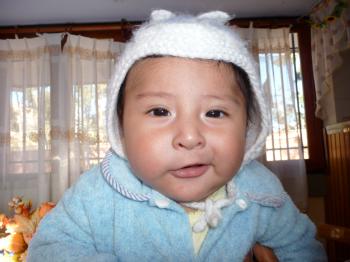 A smile from the SOS Children's Village (photo: SOS archives)

Oruro has about 235,000 inhabitants and is situated on the Bolivian Andes-plateau at an altitude of 3,700 metres. It once had a great number of silver mines, which were soon depleted. During the tin boom, which lasted from the start of the 19th Century until around 1960, Oruro was at the heart of Bolivia’s economic activity. But the tin, too, was depleted and many mines shut down in the post-boom years. Today, Oruro is no longer as economically significant.

Historically, the population of Oruro was very much in flux, and it continues to be so. Many families leave behind an agricultural life in rural areas seeking improved living conditions in Oruro – which often don’t exist. Families then move on to the next city. This constant migration is very detrimental to family stability. Many families end up living in poverty and the child labour rate in urban areas increases.

Extreme poverty, i.e. people living on less than one USD a day and therefore unable to meet their basic needs, remains high in Oruro. Around 46 per cent, or almost 200,000 people, face such circumstances here. The result is that many parents have to work extremely long hours, leaving them little time to care for their children. Around one third of children below the age of five in Oruro is malnourished, as often parents can’t afford to provide an adequate diet. In the worst cases, children have to contribute to the family income and are unable to focus on their education. It is also common for children from rural, indigenous families to migrate on their own, without their parents, in which case they are incredibly vulnerable to exploitation and violence and have little hope of ever obtaining formal work.

With silver and tin resources largely depleted, Oruro is nothing more than a stopover for many migrants

Government programmes of recent years have improved living conditions for many Bolivians. For example, Oruro was recently declared the first department in the country free of illiteracy. This is a great step for a predominantly indigenous population, for many of whom Aymara or Quechua is their first language. Literacy in the Spanish language now allows them to take part in the political and economic processes of the country. However, much work remains to be done as regards raising awareness of children’s rights and gender equality, or changing fundamental attitudes towards child labour.

What we do in Oruro

Thanks to our family strengthening programme, this mother of five was able to set up a stall and is now able to keep her family. (photo: F. Espinoza)

The programme includes day-care and a health care centre that is open to the community. There is also a childminding programme that enables working parents and single mothers to leave their children in safe hands while they are out making a living. Another focus of the programme is the development and empowerment of women.

For children in Oruro who are no longer able to live with their parents, 14 SOS families can provide a loving home for up to 135 children. They live with their brothers and sisters and are affectionately cared for by their SOS mother.

When young people are ready to leave their SOS family in order to pursue further education or vocational training, our SOS Youth Programme offers shared accommodation for them in town. With the support of qualified counsellors, they can plan their future here, learn to shoulder responsibility and increasingly make their own decisions.