La Paz is the administrative capital of Bolivia and the country’s second largest city. It is located in a basin surrounded by mountains, which means that its elevation varies from 3,000 to around 4,100 meters as the city expands up into the hills. The entire La Paz metropolitan area has a population of 2.3 million. La Paz is the country’s most important manufacturing centre, producing about two thirds of Bolivia’s tobacco products, clothing, tools, etc. Although Bolivia’s economy has improved in recent years, a large informal economy is already well established in La Paz: there are extensive markets all over the city and informal vendors on most downtown streets.

The class divide in La Paz is very pronounced, with a small wealthy elite and a newly emerging middle class living in the lower areas around the historical city centre, and the poverty-stricken majority inhabiting the ever-growing shantytowns that sprawl up the hillsides. Many of the people here in the outskirts of the city are migrants from rural areas and around half the population is indigenous.

Around 42 per cent of the population of La Paz – or over one million people – live in extreme poverty, meaning that their basic needs, such as clean water or sanitation, are not met. Although the situation regarding primary school education has improved greatly in recent years in Bolivia, in La Paz there are still an estimated 42,000 children who do not attend school. 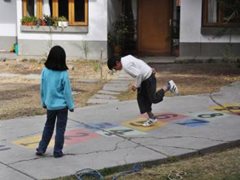 The number of Bolivian children attending primary school has increased in recent years. However, in La Paz, an estimated 42,000 children still do not attend school.

Child labour remains a big problem in La Paz, as many parents consider it normal that their children should contribute to the family income, or it is simply of economic necessity that they do. But life on the streets of a large metropolis is dangerous, and these children are in a highly vulnerable position. A childhood spent in poverty can seriously hinder the physical, mental and cognitive development of a child.

What we do in La Paz

SOS Children’s Village La Paz began its work in Mallasa, which is a district of La Paz located about 20 minutes from the city centre, in 1983.

Strengthen families: Our social centres offer a holistic and sustainable family strengthening programme that aims to alleviate hardship in the community. We ensure that children have access to education and health care.  We also run a childminding programme that allows working parents or single mothers to leave their children in safe hands while they are out making a living.

Care in families: For children who are unable to live with their parents, SOS families can provide a loving home. They live with their brothers and sisters, affectionately cared for by their SOS parent. The children attend the local schools alongside children from the neighbourhood: this way they make friends and become part of the community.

Supporting young people: Due to the economic situation in the country, it is often difficult for young people to find a job and become independent. SOS Children's Villages supports them while they attend further education and receive training. We also help them find work.